No desire to ‘go to the devil’

During the Dog Days of summer, my grandmother would wipe her brow and say, “Honey, it’s as 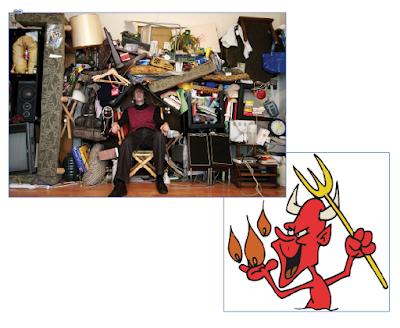 hot as the hinges of Hell.”  And I have a Palmetto State friend who declares Hell can’t be any hotter than summertime in South Carolina’s capital city.  “You can raise a manhole cover in Columbia,” he vows, “and see the devil holding his pitchfork, with the flames jumping all around him.”

I’m not sure I believe Nanny or my buddy, but I do wonder what Hell would be like.  My Baptist upbringing and the preaching of the Rev. Floyd Jenkins convinced me—long ago—“going to the devil” should be avoided.  I’ll heed the Bible’s warnings and strive for Heaven versus Hell.
“Going to Hell” is no funny matter, but I humor myself thinking about what would be a hellish way for me to spend my afterlife’s forever.  The most frequent scenario is being assigned to a trash heap otherwise known as Hoarder Hell.
You’ve seen the news clips and photographs of folks who can’t discard anything.  Newspapers, magazines, empty cereal boxes, mismatched pairs of shoes and gadgets that quit working 30 years ago are stacked from floor to ceiling.  Some rooms are so stuffed, entry is impossible.  In other parts of their dwellings, the hoarders turn sideways to slip through the narrow passages in the junk.
The homes of the most addictive hoarders would make Fred Sanford’s junkyard appear as tidy as Martha Stewart’s overly-organized kitchen. Old appliances, burned-out vehicles, busted commodes, tires, crumbling cardboard boxes filled with who-knows-what, and should-have-been-hauled-to-the-landfill garbage litter the landscape.  Even if you could stomach the stench, you wouldn’t want to set foot on the place.
Now, magnify all this by 10 billion-fold.  The piles of clutter would stretch around the world 1 million times.  And if I were unfortunate enough to be assigned to Hoarder Hell, my instructions would be to organize and catalog everything.  How long would that take?  Well, how long is eternity?


I am not a hoarder, but I save too much stuff, especially at the farm in the “boneyard.”  That’s what I call the out-of-view assortment of things I might need.  My heirs will wish I had done a better job of minimizing that collection.  That’s why—if my soul rides the elevator going down, rather than going up—I could be destined to a hellishly-hot eternity of digging in and handling the leave-behinds of history’s worst hoarders.
I repeat.  Going to Heaven or Hell is serious business, but I can’t forget a playground joke at Orange Street Elementary School about a hapless soul that wound up “going to the devil.”  Satan met the fellow at the door, maybe down one of those manholes in Columbia.  Hey, I’m joking.
In the first room of the tour, the newcomer saw hundreds of people standing—neck-deep—in steaming cow manure.  “This is awful,” he thought.  Then, he noticed they were drinking Cokes in frosted bottles.  “That’s not too bad after all,” he mumbled.  But just as he was beginning to feel better, the devil roared, “Break’s over!  Get back on your heads!”


Forgive me, Lord, I promise to do better. In fact, I’m getting up from my computer and going to toss some stuff—right now.