All 50 states are now on Team Carter 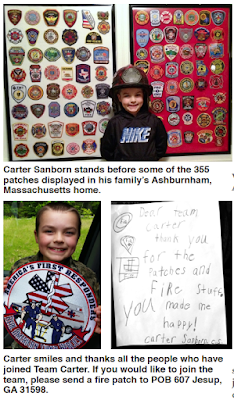 You know what happens when the proverbial pebble is tossed into a pond.  When that tiny rock hits the water—even with the smallest splash—the concentric circles go on and on.  That’s how I can best explain what happened last year after a single e-mail, and the digital ripples are still making waves.

It all started with an e-mail from Pete Hires, a lifelong friend, who now lives in Rhode Island.  Pete’s dad, Aubrey, called my dad “Neighbor,” because we lived next door on Younce Street.  Sixty years later, Aubrey and Big Dink are gone.  Now, Pete and I refer to each other as “Neighbor.”  Neighbor sent an electronic note to classmates Joe and Judy Phelps and me telling about his first-grade, special-needs grandson who is fascinated by fire fighters.  Pete wondered whether we could round up a few fire department patches.
Joe and Judy were the first responders.  They mailed Jesup and Fort Stewart patches to Carter Sanborn in Massachusetts.  In an Oct. 27, 2014, column, I asked you to join Team Carter.  You started sending things for Carter.  The Georgia Press Association rallied its member newspapers to join our little buddy’s team.  After the National Newspaper Association ran a front-page article about Team Carter, the drive went nationwide.
Monday, I got a report from Carter’s grandfather.  So far, Neighbor says Carter has received 355 patches, a dozen fire department badges, four helmets and a variety of T-shirts, uniform shirts and caps.  Eight foreign countries and three military bases have sent fire patches. In the storage room behind my office, I have a stockpile of patches yet to be sent to Carter. I hope to stretch out his excitement as long as possible.
Neighbor reports that Carter knows the postal delivery schedule, and he’s usually waiting by the mailbox.  In the beginning, the postman asked, “Who’s sending you all this mail?”  Carter chirped, “Mr. Ding the Newspaper King.”  That’s funny, but it’s not about me.  It’s about a boy whose spirits and academic performance are lifted, and he’s become a celebrity in his class.  The teacher has turned Carter’s collection into a daily learning opportunity, as he shows a new patch and tells where places—such as Michigan’s River Rouge Fire Department—are located.
Many people have become a part of this delightful quest, and I thank you. One team member stands out as the Most Valuable Player on Team Carter.  Augusta’s Cookie Serotta is a grandmother of three: Eva, Sydney and Eliott. If you could have only five friends, you’d want Cookie and her husband, Abram, to be two on that treasured list.  There is no limit to their selflessness.  Like the Energizer Bunny, this couple just keeps on going and going and going and giving and giving and giving.


Abram jokes, “We can’t drive through a town without Cookie insisting we stop at a fire station to get another patch for Carter.”  And they’ve made plenty of stops.  I estimate the Serottas are responsible for at least 200 of Carter’s patches.  When I suggested that all 50 states should join Team Carter, Cookie latched on to that challenge like a South Georgia snapping turtle.  She wasn’t turning loose until it thundered.
At one point, I thought Abram was going to drive Cookie to New England.  Numerous letters to Delaware had gone unanswered.  Last month, it thundered in Vice President Joe Biden’s home state.  Cookie got Carter that hold-out patch.


Take a look at this wonderful 7-year-old’s smile.  If that doesn’t make you smile, forget tossing a pebble in the pond.  You need to jump in instead.