It’s time for America to pull together and run far

Democrat and Republican extremism makes me nervous.  I am as leery of a radical right-wing nut 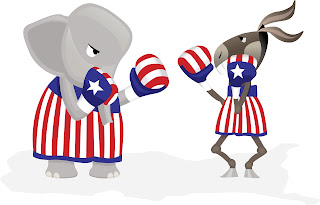 as I am a socialist-leaning liberal.  So in politics, where am I?  If I say that I’m stuck in the middle, “stuck” might be the wrong word.  Perhaps a better way to explain is that I choose to be in the middle, without declaring any party affiliation.  On some issues, I am a my-heels-are-dug-in conservative.  On others, I am a have-it-your-way liberal—as long as you don’t try to force something on me. Most of the time, I am a live-and-let-live moderate.
I like the freedom of making up my own mind.  It’s troubling how too many Americans are too quick to jump into their idealistic foxholes and start firing at anyone who dares to have different opinions.  Why must Democrats traditionally hate Republicans and vice versa?  Both parties seem to enjoy baring their fangs.  The possibility of productive discourse on important issues has all but evaporated.
Debate is good.  Dictatorship is not. I cannot and will not blindly guzzle a political party’s Kool- Aid. However, I am willing to listen.  Maybe it was Benjamin Franklin who opined that we should listen to the fools, for sometimes, they are right.  Fools or not, the First Amendment ensures free speech.  Everyone is entitled to his or her say.
The same goes for voting.  In primary elections, I don’t like having to declare Democrat or Republican.  I have trouble fitting into a one-size-fits-all pair of political trousers. When I pull the voting-booth curtain, I will always vote for the person whom I feel is best qualified.  As long as I obey laws, I embrace a you-can’t-tell-me-what-to-do mindset.
That independent streak rubbed off on our three children, too.  Our daughter is a good example.  Emily is 39.  She’s a devoted wife, a doting mother of four boys and a successful entrepreneur.  Before Emily transferred to the University of Georgia to earn her degree, she enrolled at the University of Alabama.
Her goal was to experience another Southern, public university.  She also wanted to pledge a sorority, and she did.  Emily accepted a bid from her first choice.  She was thrilled, but the joy was short-lived.  One night she called to report: “I quit.  I walked out of the sorority.”  She explained, “They tried to tell me how to vote for homecoming queen.  This is America.  Nobody tells me how to vote.”  From 200 miles away, I gave our 18-year-old a standing ovation.

Now, let’s go back to this political backbiting.  The next presidential campaign cycle is full-throttle, and candidates are clawing at each other’s eyes.  Regretfully, political experts rationalize that the only way to “move the needle” is to be negative.  The wannabes have gulped that Kool-Aid strategy by the mega gallons.
Rather than hear what candidates can do to improve America, we are flooded with rants about who can’t keep his pants zipped or who hides her e-mails.  Character is important, but so are vision and leadership ability.  I’d like to hear: “This is how to fix what is broken in America.”  There’s an African proverb: “If you want to run fast, run alone.  If you want to run far, run together.”
We don’t need another quick-triggered cowboy or selfie-taking celebrity in the White House.  Foolish or not, here’s what I think.  America needs a president and a Congress that can pull us together.  It’s time to concentrate on how far we can run—in the best-for-all direction.