Asphalt and I are well-acquainted.  As I motor over about 1,000 miles of blacktop per week, I often think about friends who now live in memories.
Monday, I glanced at my fingers wrapped around the steering wheel.  Noticing paint smudges, my mind raced back to the 1980s.  I was walking in the back door of the kitchen of Northside Elementary School.  Warner Yeomans was elbow-deep in suds, washing a pot half the size of a VW Bug.
“Hey, Warner, I didn’t expect to see you here,” I said.  The retired fireman said, “Well, I needed a job to get health insurance.”  I asked whether he liked washing dishes, and he said, “Not really, but I need the insurance.”  Before long, he joined us at the newspaper.  He liked “running the routes,” delivering newspapers to post offices and stores.  And he really loved our little blue Nissan truck, but that’s another story. 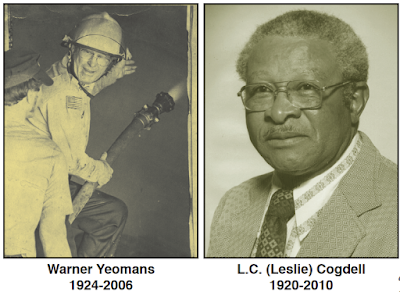 Besides being an ace firefighter, Warner was a wizard with a paint brush.  There’s no way to count the houses and rooms he painted.  Warner’s schedule at the fire department gave him ample free time to handle his customers.  We were lucky to have him as our go-to paint guy, too.   I don’t pry open a can of paint without thinking about Warner.  What a pleasant, easygoing and loyal friend he was.  And I don’t look at my lightweight aluminum boat that I don’t see Warner—with paint smudges on his hands—smiling and holding a fishing pole.
That mental image—Warner pulling in a white perch, while sitting in that pea-green skiff—made my mind drift toward memories of another friend—L.C. Cogdell.  L.C., like Warner, was a joy to be around.  He was always upbeat, and I enjoyed prodding him to tell another of his stories.
L.C. and I got to know each other putting on fish fries.  And that’s what we were probably doing, frying some of Warner’s white perch, when L.C. recounted his days at Henry Ford’s Richmond Hill plantation. After Ford purchased the Georgia property, he recruited L.C., a school principal, to supervise his house staff.


One morning, Mrs. Ford was looking out the kitchen window and asked, “L.C., which one of those cars is yours?”  He pointed and replied, “Why, Mrs. Ford, that’s my old blue Pontiac.”
“L.C.,” she said.  “Don’t you know whose name is on your paycheck?”
“Yes, ma’am, but that’s all I can afford.”
Two weeks later L.C. got a call to come to the railroad depot.  A brand-new Ford was sitting on a railcar flatbed.  With a grin as wide as the car’s bumper, L.C. told me, “And that was the first new car that I ever had to peel the paper off.”
That story led to this one:  “One hot summer day, I was driving Mr. Ford around, and he asked me if I would like an ice cream.  I said, ‘Sure, Mr. Ford.’”  L.C. pulled into a roadside stand and ordered two ice cream cones.
“When I handed Mr. Ford his ice cream, he said, ‘L.C., do you have any money?’  And I said, ‘No, sir.’ And he said, ‘Well, I don’t either.  What are we going to do?’’’
While one of America’s richest men licked his ice cream, L.C. turned to the lady at the window and asked, “Do you know who my friend is?”  The cashier shook her head, and L.C. said, “Why, he’s Mr. Henry Ford.  Don’t you think it’d be nice to give him and his driver ice cream cones?”
Decades later—as he told me that story—L.C.’s baritone laughter duplicated what Henry Ford heard, as they drove away with their free ice cream cones.
Even with all of the late Detroit magnate’s money, you can’t purchase those kinds of memories.
Neither can you buy friends like Warner Yeomans and L.C. Cogdell.