Thanks to patriots like Morley Piper, we can wave our red, white and blue

Do you have any idea what Hell-on-earth would be like?  Ask Morley Piper.  He’s no Michelangelo, but he can paint that hellish picture.  On June 6, 1944, as a 19-year-old untested Army officer, Morley was sardine-packed on a Higgins boat, lurching toward Normandy’s Omaha Beach. 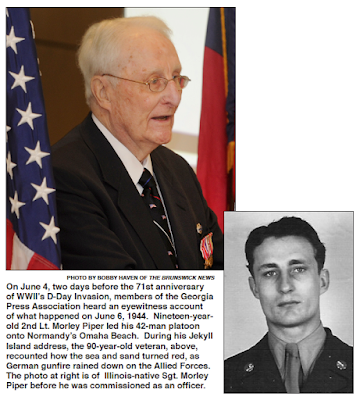 The sky hung low, like a giant gray blanket to be dropped over the dead.  The Atlantic Ocean roiled in anger—as if it were on Hitler’s side—and Allied troops fought back seasickness and fear before they plunged into the salty waters.  Soldiers prayed their combat boots would hit bottom, lest they be pushed to a drowning death beneath their 70-pound packs.
Morley was one of the lucky ones.  He waded ashore through a hail of German gunfire.  The sea and sand turned red as blood—much of it American blood, spilled everywhere.  As one of his comrades writhed in pain, the teenage second lieutenant called for a medic.  Miraculously, two corpsmen appeared “out of nowhere” to scoop up the wounded infantryman.
Morley watched as the pair scampered—with the stretcher—to what they hoped was safety.  Seventy-one years later, he can still see the human carnage from the exploding land mine beneath their feet.  On Day 2 of the invasion, the freshly commissioned leader could account for only 17 of his 42-man platoon in the 29th Infantry Division.
For 50 years, the newspaper executive couldn’t or wouldn’t talk about those horrific World War II memories.  Finally, Morley’s family coaxed the reluctant hero to tell his story—the American story—of how the United States helped crush Nazi forces, liberating France and ultimately the Free World, once Japan fell, too.
Since his change of mind, Morley guestimates that he’s given 25 speeches.  On the eve of D-Day’s 71st anniversary, I listened as he repainted the hellish picture for members of the Georgia Press Association on Jekyll Island.


Morley told us: “At first we hardly fired a weapon.  Survival was the priority.  We had hoped to move up quickly—get off the beach in an hour or so … but at the end of the first hour, we were huddled against anything we could find for cover.  We were trying to control, but we could feel the cold fingers of fear almost getting the best of us.”
Despite the “fog, smoke and cliffs,” Morley and others were able to identify German targets and return the fire. “Our backs were to the sea … we were caught in a classic loser’s position—facing annihilation or capture,” he told us in a calm voice.  “Every day a new set of terrifying experiences presented themselves.  Fear was a strong emotion, followed by anger and sadness … and determination.  We wanted to live, of course.  We wanted to do well as soldiers.  We had, to a large extent, become fatalistic.  If we had to die, we hoped we could do that well, too, even bravely.”
Against grave odds, history records bravery and determination—by men and women like Morley Piper—made the difference.  Morley doesn’t talk about his Bronze Star or Purple Heart.  You have to research those.  What he did talk about—when I called him at his Essex, Mass., home—was the beautiful American Red Cross nurse from Massachusetts, Wanda Woleyko, whom he met and eventually married in Paris.  Sixty-eight years after their wedding, Wanda died this past March.
Morley and Wanda returned to France many times.  It was always a special outing for them.  One of the trips was to commemorate the 50th anniversary of the D-Day Invasion.  On the 70th anniversary, four generations of Pipers walked through the Normandy American Cemetery.  His great-granddaughter Camille celebrated her first birthday in France, where her great-grandfather credited his survival to “fate and luck.”
After 45 years as executive director of the New England Newspaper Association, Morley retired in 2009.  Today, the 90-year-old veteran heads a national organization for managers of state newspaper associations.  He still goes to the office to open letters and return phone calls and e-mails.  He also finds time to reflect on emotions like this: “Last year at the 70th anniversary, I finally got to the place in life where I can say without shame that nights in the foxholes, the ditches, the bombed-out buildings that I shook and trembled … and, yes, I cried … at the things I saw and had to do that day.”
On July 4, Americans will rollick—popping firecrackers, grilling hamburgers, eating watermelons, drinking beer and waving the red, white and blue.  Amidst the joyous ruckus, we need to pause and sing “God Bless America” and salute our patriots—past and present—the brave men and women like Morley Piper.