Newspapers can do dumb things, too

“Stupid is as stupid does.”
--Forrest Gump
Very few of us would want to be called stupid, but I have a book entitled Why Smart People Do Dumb Things. I’m not being mean-spirited, but I can tell you about some really dumb people.  I am talking about folks like me, the ones with ink in their veins.
Back when the World Wide Web was born, the Internet inspired newspapers to be dumb. In our rush to embrace this newfangled medium, newspapers didn’t have the forethought to consider the unintended consequences.   Newspapers helped generations to believe that another word for the Internet is “free.”
As I write this, I can hear my 115-year-old grandmother chuckling from her churchyard grave.  “Honey, if you let a fella get his milk through the fence,” she is giggling, “he’ll never buy a cow.”
With that barnyard wisdom, she just explained why newspapers ought to have “dumb” stenciled on their foreheads. 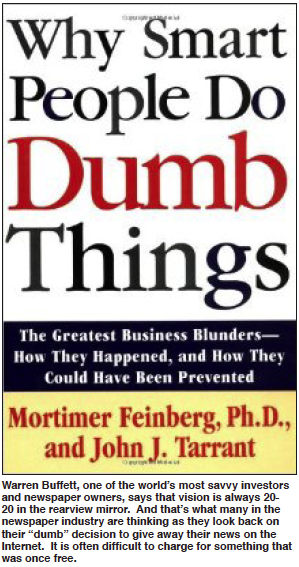 Big-city newspapers were the first to poke their ink-stained udders through the fence.  Before long, it was the blind leading the sightless.  Small-town newspapers were joining the dumb and dumber parade.  Not all newspapers agree, but some of us have burnt rubber, backing out of that it’s-all-free, dead-end business model.
Think about it this way.  You’d like a snack, so you walk into a convenience store.  If you don’t stop by the cash register to pay for your items, you’ll get arrested for shoplifting.  Merchants have an investment in their inventory.  That’s why they put a price on things such as Cokes and Snickers.
It’s the same for newspapers.  What you are reading right now is the most valuable thing we do.  The research, the writing, the editing, the photography and the dissemination of this information is an expensive investment.  Our people can’t work for free.
“But,” you argue, “there’s so much on the Internet that is free.”  Yes, and much of the news content on the Internet has been lifted from newspapers that haven’t awakened to the milk-through-the-fence analogy.
“But,” you continue to argue, “I can get my news from radio and TV.”  You can.  There are many fine broadcast news outlets, but their reports are abbreviated at best.  How much more do you want to know about your community, state, nation and world?  Traditionally, it’s been newspapers that have committed the extra resources to dig and go beyond sound-bites.
“But how about blogs and social media?” you ask. The more people talking, the better the First Amendment works.  But many blogs—just like our editorial pages—are opinion.  Opinions are an American right, but opinions don’t have to be factual.  The same goes for Facebook and the like.  Every week, I hear of reckless postings that spread rumors rather than fact.  Unraveling the aftershock is messy.  With this newspaper, we stake our reputations on delivering information that is well-researched and credible.   Otherwise, our reporting would be no more reliable than coffee-shop gossip.
So, what about the Internet?  For any business, including newspapers, change can be disruptive.  But in our case, the Internet has allowed us to perform better and faster.  Now, for example, we can provide e-editions that are accessible around the globe.  All we ask is that you subscribe, and you’ll get both: print and electronic editions.
Established in 1865, The Press-Sentinel is the oldest business in Wayne County.  We are grateful that your loyalty—through readership and advertising dollars—has sustained us for 150 years.  We aim to keep adapting to change and remaining relevant, while being supportive of our community.  That mission requires our continuing to be a good business, charging fair and profitable prices for our services.
I’ll admit. I’ve done some mighty dumb things.  However, I don’t want Forrest Gump to show up at 252 W. Walnut St. and say, “Stupid is as stupid does.”