A solid business—big or small—must have a plan.  Even more important are the people behind the plan.  Forty-four years ago, I learned the necessity to be surrounded by folks who can bring their brains, passion and loyalty to the team.  In terms of years of service, look at our roster of the Top 10 associates at The Press-Sentinel:
Lynn Rice, 41
Danny Stickland, 34
Drew Davis, 30
Melisa Mallard, 25
Marcelle Yeomans, 22
Sheila Hires, 20
Eric Denty, 19
Charles Turner, 17
Derby Waters, 13
Jamie Denty worked for us for 15 years, but she’s been writing a column for 45 years.  John Rogers just retired after 50 years.  I couldn’t be luckier to have a team like this.
Go back with me to early 1989.  We were purchasing Community Newspapers Inc. (CNI), with several dozen newspapers scattered across Georgia and the Carolinas.  My partner, Tom Wood, and I knew our success would be tied to two things: the right plan and the right people. 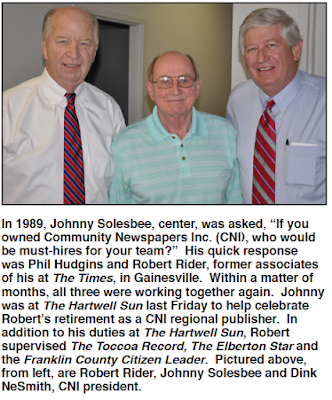 Chances are that you know most of the people who produce your hometown newspaper.  I’d like to introduce you to three whom you probably don’t know.

The first step was to draft a mission statement.  With our goals and objectives established, we started organizing a team. Who did we have?  Who did we need to recruit?  Before the closing, the owner allowed us to make our first hire. Veteran newspaperman Johnny Solesbee came aboard.  You can’t help but like and trust Johnny.
I asked Johnny, “If this were your company, who would be must-hires?”  Johnny’s blue eyes flashed.  And with a smile, he said, “Phil Hudgins and Robert Rider.”  The three of them had gotten their starts at a very good newspaper, The Times, in Gainesville.
Before long, Phil and Robert had signed on.  Phil turned The Clayton Tribune into one of the best weekly newspapers—anywhere.  He was so good that we created a new role for him: CNI senior editor.
With Phil as a writing coach and mentor to our journalists, our quality soared.  Over the last decade, Phil has transitioned to retirement.  Still, our people reach out to him.  You can’t help but like and trust Phil Hudgins.
Johnny’s other must-have, Robert, joined him in Cornelia to direct the advertising sales of our Northeast Georgia Region of five newspapers.  From the outset, Robert brought high energy and bright ideas to those newspapers under Johnny’s management.  I remember the first time I heard Robert say this:  “Unless you hear ‘no’ six times, you aren’t selling.  You are just taking orders.”
While in Cornelia, Robert did a superb job.  We knew he could do more.  Before long, we needed a regional publisher for a cluster of weeklies and a press plant in South Carolina. With a smile, Robert and Laura Rider moved to Marion, S.C.
And then came the acquisition of our first daily newspaper, the Richmond County Daily Journal, in Rockingham, N.C.  Tom and I looked at each other with the same thought: “Let’s ask Robert to accept that challenge.”  Once again, the Riders packed and moved across the state line.  And, yes, with a smile.


Robert and I got to know each other well.  You can’t help but like and trust Robert.  I always looked forward to his candor as we talked business, often over plates of barbecue.  During one of those visits, Robert dropped a hint.  His sons, their wives and his grandchildren lived in Georgia. One day, he and Laura would like to move closer to their family.
That was a reasonable request.  As fate would have it, that opportunity didn’t take long to appear.  Robert and Laura moved to Hartwell in 1999, where he provided leadership for a region including The Hartwell Sun, The Toccoa Record, Franklin County Citizen Leader, The Elberton Star and a press plant.
I can’t imagine how the last 25 years might have been if I hadn’t asked Johnny that question.  Johnny was the first to retire, followed by Phil.  Now, Robert has retired after 50 years.  I am proud to say that one-half of his stellar career has been with us.  Johnny Solesbee, Phil Hudgins and Robert Rider are three incredible professionals.  Even more, they are three irreplaceable friends.
Looking back and looking ahead—thinking about all the wonderful people on our team—I just couldn’t be any luckier.