Sometimes, my brain gets wonky. About every six months, I rattle awake wondering: “Why didn’t I study for this final exam?  Why did I skip so many classes?  Where’s the classroom anyway?”
Maybe listening to grandsons talk about the start of their new school year caused me to dream that, again.  And since I was staring at the ceiling, I lay there thinking about my school days.
Aletha Poppell, Barbara Bielfelt, Mildred Jones, Gussie Richardson, Paige Nichols and Sara James did their best with me in elementary school.  After first grade at T.G. Ritch, we moved across the tracks to 111 West Orange.  For five years, I walked six blocks to Orange Street Elementary.  Principal Tom James taught me that there’s a “pal” in principal.  His wife, Sara, showed me how to grip a Louisville Slugger, as well as get me ready for junior high. 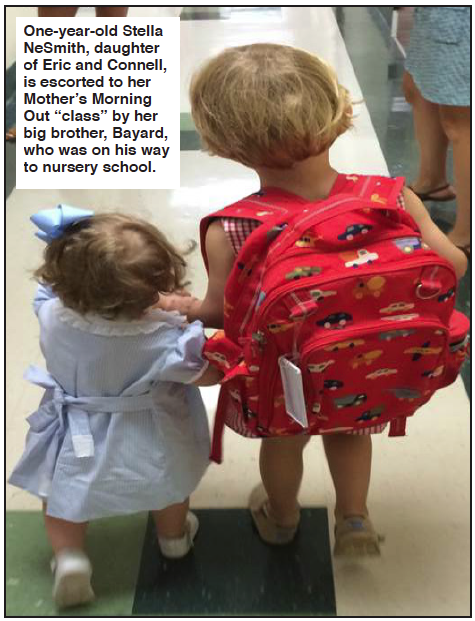 Jesup Junior High was back across the tracks.  I can still smell the oil-soaked floors and hear the boards creak beneath the stampede of students.  Principal James Bacon, with his booming baritone, starched white shirts and slicked-back black hair, gave no doubts that he was in charge.
I learned he was my pal, too.  The popular thing for advanced students was to take French in the eighth grade.  Even though I was in the honor society, I was nowhere near the top of my class. My homeroom teacher didn’t think I should try a foreign language.  She told Mr. Bacon, “The boy barely has a grasp of the English language.”  My pal overruled saying, “I think we should give him a chance.”  An A+ in French couldn’t have given me a bigger boost.
As long as Nanelle Bacon lived, she teased our children.  “Your daddy almost flunked the seventh grade because he couldn’t do decimals,” she said.  “Then I told him to put a dollar mark in front of them.  He never missed another problem.”
Tim Cockfield had a challenge teaching me beginning algebra, too.  I did learn, however, that he was our own wisecracking Johnny Carson.  One day our math teacher was sitting on his desk, swinging his feet.  Someone commented, “Mr. Cockfield, you have on a yellow sock and a green sock.” He fired back, “Yeah, I know.  I’ve got another pair just like them at home.”
Out on the end of West Orange, the letters on the side of the low-slung brick building read Wayne County High School.  Still, we called it Jesup High School.   From day one, we knew C.E. Bacon was in command.  The principal’s military-like voice—over the intercom—brought the campus to attention.


I am grateful to the many fine educators who got me ready for college and life.  There were plenty of serious, teachable moments, but here are two laughable memories:
•   In Delores Roberson’s 10th grade biology class, Pete Hires scraped the leather sole of his Bass Weejun beneath the back of Randall Bramblett’s desk.  In a concerned voice, Mrs. Roberson asked, “Randall, are you not feeling well?”  Snickering around the room exploded into laughter.  Realizing she was in the middle of a sophomoric prank, our teacher’s face blushed tomato-red.  Frog-dissecting discussion would have to wait for another day.
•   I don’t drive through Screven without hearing the chuckling of C.W. Collins, my ninth grade algebra teacher.  For years—when we’d visit—he’d start laughing, again.  And this might explain my wonky dreams.  After about a week, I said, “Mr. Collins, you make it sound so simple.  I thought even a moron could do these problems, but guess what?  He couldn’t.”