Aunt Lillie could bark with the best of ’em 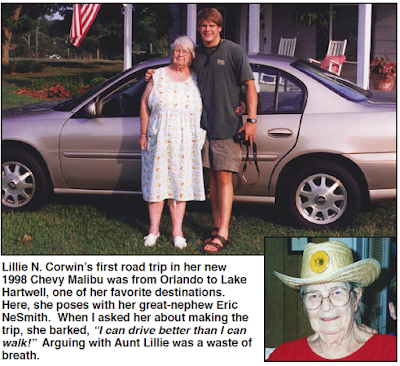 marriages took.  Whatever the reason, Aunt Lillie could bark with the best of them. Her grumpiness was legendary in our family.  But as a little boy—standing in for the child she never had—I found a crack in her fire-breathing persona.

Beneath that gruffness was a woman who liked to talk, and she wanted someone to listen.  When I was 12, I got to listen for two weeks—all the way from South Georgia to Vermont and back.  She was determined to show me Washington, D.C.; New York; and New England.  And she did, from the front seat of her red and black, un-air-conditioned, 1957 Chevy station wagon.
We weren’t 10 miles into South Carolina before she started barking at the predicament we were in—sandwiched in the middle of a too-slow-for-her Army convoy.  Hanging her head out the window, she saw a chance to leave the military trucks in her Chesterfield cigarette’s smoke.  Swerving left, she gunned the V-6.
Within a half-mile, the big olive-drab trucks rumbled past us.  A state trooper was asking, “Ma’am, what’s the hurry?”  It’s a wonder the officer didn’t triple the $10 fine when she barked, “And how much of that are you putting in your pocket?”
My dad’s oldest sister was short on diplomacy, and I guess that’s why everyone was happy that she latched onto me.  For decades, I was the designated listener to Aunt Lillie’s needs. She was fiercely independent, but she knew how to play me like all 88 keys on a piano. And she wasn’t bashful about asking. In her early 80s, Aunt Lillie called to say that she needed a new car.
“OK,” I said, “let’s lease one.”
“What!” she barked. “You think I’m not going to live long?”
“Well,” I said, “I was just thinking.”
“Well,” she said, “I think I want a Honda Civic.”
I suggested that she take a test drive.  Two days later, she called back on my 800-number. (She really liked that.)  “I changed my mind on that Honda.”
“Why?”
“Hondas have bucket seats, and my bucket is way too big to fit in theirs.  Now, I want a Chevy Malibu.”


“Fine, Aunt Lillie.  I’ll get you one from Walker Chevy-Olds, and I can fly home.”
“Oh, no!” she barked. “I want you to buy it down here in Orlando.  If there’s a problem, I can go in there and give them a piece of my mind.”
“Good idea,” I thought.  “Keep me 620 miles out of that.”
Eventually, Aunt Lillie had to park her Malibu. I moved her to a nursing home near our farm on Lake Hartwell.  She enjoyed the animals, but she really liked sitting in the shade and eating the figs that I picked for her.
One day, she called, “You need to come over here—quick!”  The crisis of the day was the color of Bob Barker’s hair on The Price is Right.  “Look at him,” she barked. “His hair is black.  These shows are old.”  I disconnected the facility’s cable service and installed a satellite dish. Aunt Lillie died happy, watching senior-citizen Bob Barker, gray hair and all.
Aunt Lillie’s instructions were emphatic: “Bury me next to my family in the Jesup City Cemetery.”  As I was pondering the logistics, I thought about the unforgettable adventure Aunt Lillie and I took that summer. Why not one more trip, but this time in my air-conditioned SUV?
A paid-for casket was waiting in Jesup, so a disposable coffin would do for her ride home.
This time, I talked, and she listened. I didn’t hear her bark—not once.  But I do think Aunt Lillie snickered, somewhere around Swainsboro.