“Turn left at the Tastee-Freez,” I said, scooting forward on the red leather backseat.
The clattering of Norfork Southern’s rails punctuated the nervous chatter in the Cadillac’s front seat as we rumbled over the Palm Street crossing in northeast Jesup.
One of Wally’s Boys, John Donaldson, was riding shotgun, and the Wayne County High head football coach quizzed, “You sure this is the way?”
Another of University of Georgia Coach Wallace Butts’ disciples, Dr. Hurley Jones, took his right hand off the big car’s wheel and patted his friend on the shoulder.  “Relax, Coach.  This is his hometown, too.”
I broke in, “Doc, turn left.  Look for State Street and turn right. The Scotts live at 596.”
“Nervous” was an understatement.
The rumor in our tiny corner of the Bulldog Nation was that Lindsay Scott, the trumpet player turned all-star wide receiver, was about to pull on a dreaded orange jersey, courtesy of Tennessee’s Coach Johnny Majors.  “We can’t let that happen,” groused Doc as he turned onto State Street, looking for Raymond and Johnnie Mae Scott’s house—home of the 17-year-old, the one we wanted to wear red and black.
Hurley helped organize the Southeast Georgia Bulldog Club and cajoled me into being one of its first presidents.  That’s why I was in Doc’s Cadillac that day, eager to talk with an athlete who—thanks to Larry Munson—would become famous.
But that almost didn’t happen.
From 100 yards away, I pointed and said,    “There’s Lindsay.”
Wearing an orange “24,” Lindsay was shooting baskets in his front yard.  “Was” is a key word because when Lindsay saw us, he ditched the basketball and high-tailed it.  Pulling up to 596, Doc said, “Well, I guess this was a wasted trip.  I can’t believe he’s going to Tennessee.”
“What we going to do?” asked John.
“We’re going in,” I said.
“Why?” Doc asked.
“Because this is Lindsay’s home,” I said.  “I bet Johnnie Mae is in there cooking supper. When Lindsay gets hungry enough, he’ll come home.  All we have to do is wait him out.”
Raymond and Johnnie Mae were gracious as we sat in their den.  But you could tell Mamma was uneasy.  Johnny Majors, not long ago, had been sitting on the same sofa—urging Lindsay to come to Knoxville.  And now, there were three Bulldogs in her house, saying how much they wanted her younger son in Athens.
You could hear the wall clock in the kitchen ticking through the minutes.  One hour went by, then two.  We kept on talking.  And then we heard the back door creak open.  Hunger pangs had pulled Lindsay back home. Still wearing the orange “24” jersey, he sheepishly said, “I’ve been thinking about going to Tennessee.”  John and Hurley took turns recounting their playing days in Sanford Stadium.  Lindsay started to squirm, and I could see an opening.
“Lindsay,” I said. “Tennessee is a fine school, but Knoxville is a long way from Jesup.  Would you like for your family and friends to see you play?”
He nodded.


“Well, hundreds of your hometown friends go to football games in Athens,” I said.  “It’d be easier for your family to watch you play.  Think about Jacksonville.  It’s only 100 miles away.  Imagine how many people from Jesup would be cheering for you during the Georgia-Florida game.  And, Lindsay, the Bulldogs have something the Volunteers don’t.  They have Larry Munson, broadcasting every game right here in Jesup on WIFO.  You won’t get that wearing an orange jersey.”
Lindsay smiled and said, “I think I’ll go to Georgia.”
But history will show—as it should—that Mike Cavan, former All-SEC quarterback and UGA recruiter, did the real magic, getting Lindsay’s signature where Vince Dooley wanted it, on a Bulldog commitment.
Fast-forward to 1980. 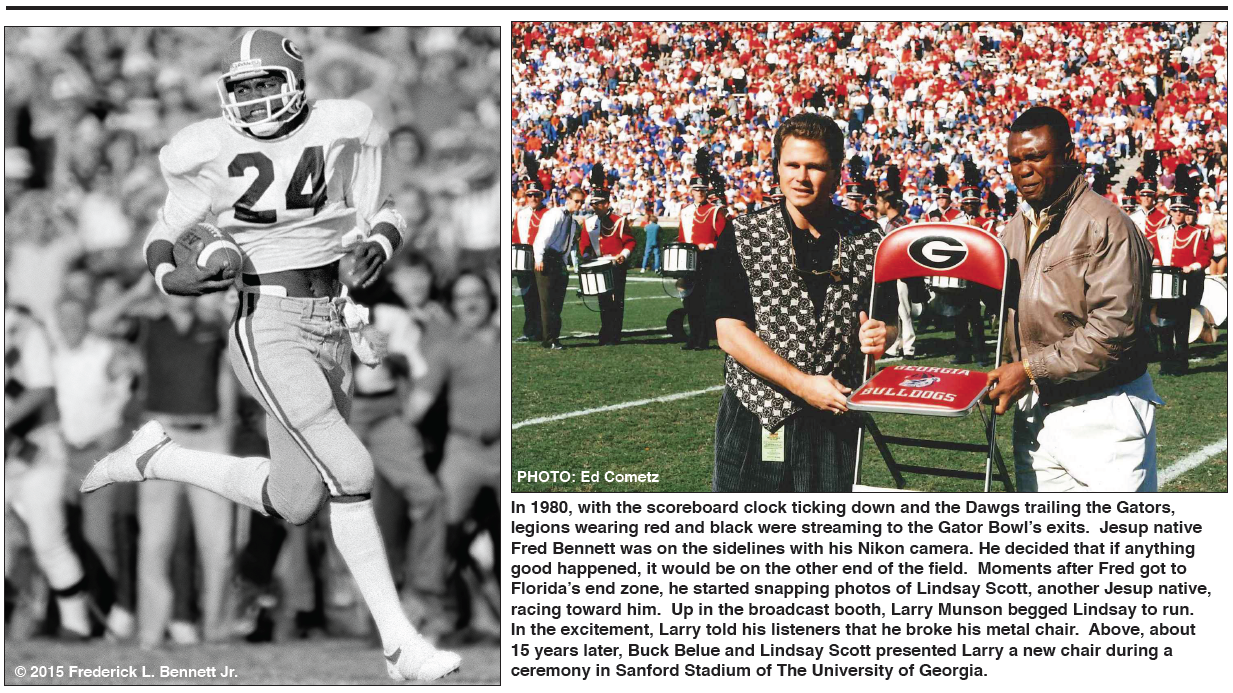 
The rest is Larry-broke-his-metal-steel-chair-with-about-a-5-inch-cushion history.  For 35 years, when I’ve needed a boost, I replay Larry’s immortal words: “We were gone.  I gave up—you did, too.  We were out of it and gone.  Miracle!”