Bulldog Nation is tired of hollow hype and elusive glory

Fifty years—that’s how long I’ve followed Georgia Bulldog football. I can take you to the exact 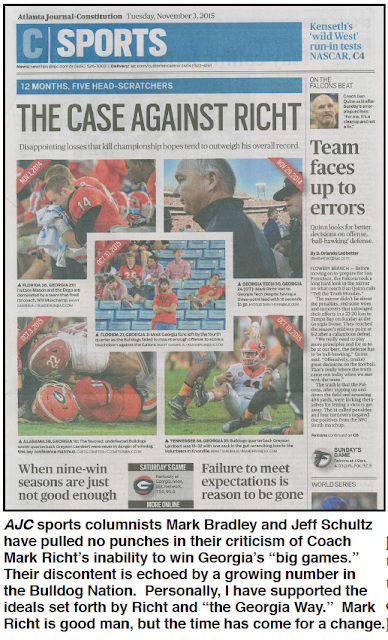 spot where I listened to my inaugural game, sprawled on the sculpted Coke-bottle-green carpet of my parents’ living room.  In 1965, my future alma mater’s team was playing Florida State University’s Seminoles in Tallahassee.

And that was the first time my Bulldog Spirit sagged.  I thought I could hear Bob Taylor’s leg snap on the radio.  On Sept. 18, the running back had sprinted into Dawg lore, as the recipient of the Kirby- Moore-to-Pat-Hodgson-flea-flicker lateral to beat Number 10 Alabama. Taylor rode on the shoulders of the Red and Black that day. On Oct. 16, he rode off the FSU field on a stretcher.
Over the past half-century, I’ve seen the Bulldog Nation’s emotions soar higher than Brasstown Bald, including that Knoxville night of Larry Munson’s 2001 hobnail-boot declaration.  Then this year—on that same Neyland Stadium turf—UGA hearts crashed when Nick Chubb was crippled.  The score was ugly, too.
Add that to the embarrassing loss earlier to Alabama, 38-10.  Could it get any worse?  If you paid any attention to how the Florida Gators shamed the Bulldogs—again—last Saturday, you know the answer.  CBS college football analyst Brian Jones called Georgia’s performance in Jacksonville “putrid.”
Jones is not alone.
I’ve never seen more Bulldog fans foaming at the mouth.  The only way many of them will be satisfied is to see Coach Mark Richt fired.  They want him gone—tomorrow!  As disappointed as I am with our “putrid” play, I’m not going to pile on that get-rid-of-the-coach frenzy.
Not now.
I’m for focusing on whipping Kentucky, Georgia Southern, Auburn and Georgia Tech.  This year, if we can’t beat that bunch—every one of them—we really do need to wonder what we are getting for our $4 million investment in a head coach.  And that’s not counting his fleet of pricey assistants.  Don’t get me started on our squib-kicking fiasco and last-minute losing to Georgia Tech in 2014.
Yeah, I’m unhappy about the 10-year championship drought.
Yeah, I’m unhappy with our repeatedly being outcoached and outplayed in big games.
Yeah, I’m unhappy the Junkyard Dog spirit is a ghost of the past.
Yeah, I’m unhappy that we got flagged three times in one game for having 12 players on the field.
Yeah, I’m unhappy that we can’t recruit a player who can consistently kick the ball out of the end zone.


Yeah, I’m unhappy that too many are joining Steve Spurrier in poking fun at us.
Yeah, I know.  We’ve been spoiled into expectations of victory—every time.
Yeah, you are right.  I don’t know my “Xs” from my “Os,” but I do know three key ingredients to winning—in any endeavor: preparedness, passion and execution.  Look at this season’s three defeats, and those three factors appear to be common denominators.  I also know our proud franchise is in peril if change doesn’t come.
There might be better coaches, but I don’t believe there’s a better man coaching college football than Mark Richt.  He is a much-to-be-admired gentleman.  I applaud his ideals.  Most programs would covet his winning record, but this isn’t just any program.  This is the championship-hungry Bulldog Nation that is tired of hollow hype and elusive glory.
When the Tech game is over, Mark Richt shouldn’t be fired.  Instead, he should say “thank you” for 15 years, take his millions and move on.