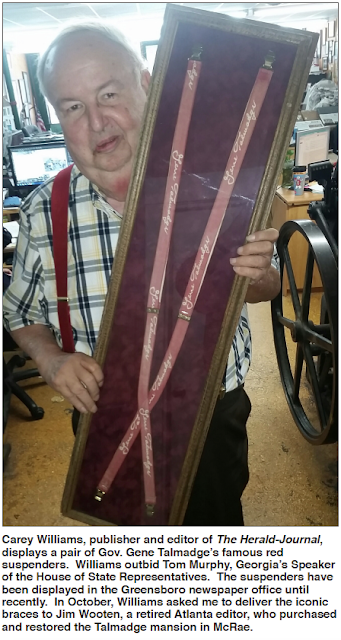 If you were to call Carey Williams Jr. colorful, you’d need a whole box of Crayola crayons to complete the description.  The editor and publisher is a legend, and his Greensboro newspaper is an institution in Greene County, 30 miles below Athens.  Carey follows another legend. Carey Sr. held forth in the editor’s chair until he died at 91 in 1991.

I’ve known of the Williams family for almost 50 years.  In recent times, I’ve gotten to know Carey Jr. personally.  When I’m passing through his town, I stop and buy a copy of The Herald-Journal.  The other day, I asked a convenience store clerk, “Do people read this paper?”  Behind the counter, a chorus of ladies chirped, “Lord, do they?  There’s a line of folks waiting on The Herald-Journal to get here.”
A while back, Carey invited me to visit his office.  He had something to send to Jim Wooten, a retired Atlanta editor, who purchased and restored the Gene Talmadge mansion in McRae.  On my next trip through Greensboro, I parked at 107 Main St. and picked up the item that I’ll deliver to my friends, Jim and Ann Wooten, down on Sugar Creek in Telfair County.
A few days later, I got a letter to tell the rest of the story.  Here’s what Carey wrote:

My father, Carey Williams Sr., was editor of The Herald-Journal in Greensboro from 1930 until his death in 1991.  He often told the story.
Gene Talmadge, during the 1930s, would speak more in Greensboro than anywhere.  The reason was Greene County was the moonshine capital of Georgia.
During the Depression, it was the only way to make a living.  Even Sheriff Hixon had a still in his back yard; later led to his defeat.
Major Walker was the king of the moonshiners.  He had so many stills that at lunchtime he would blow a whistle for lunch for the workers.
After Gene Talmadge spoke in Greensboro, he would tell everyone to go to the drugstore the Cokes and ice cream were on him.
Then Carey Sr., Gene and his driver would head out Georgia 15 South to Major Walker’s home two miles from Greensboro.
Major Walker would come to the door and welcome Gene to his home.  Major, dressed in overalls, would reach under his bed, pull out a sack of money, and give Gene a handful and they would hug.
Carey Sr. was also close to Herman Talmadge, who beat M.E. Thompson for governor.  Herman appointed Carey Sr. to the Board of Regents, where he served for over 30 years.
Herman Talmadge had two pairs of suspenders that belonged to Gene.  He kept one pair and gave Congressman Bo Ginn of Millen the other pair.


When Bo hit on hard times,, they had an auction in Millen selling his belongings.  One item that was advertised was Gov. Gene Talmadge’s suspenders.
I, Carey Williams Jr., was interested in the suspenders due to my father’s support of the Talmadges.  I drove down to Millen to the auction.
As the auction got under way, a state representative or senator from that area told the auctioneer, “Sell the suspenders first because Tom Murphy wants them and he has given me $500 to bid.  I have to get back to Atlanta.”
The auctioneer remarked, “I have a $500 bid for the suspenders, going once.”
I said, “$600.00,” and the state rep ran over to me and said, “You understand I am bidding for Tom Murphy.”  I told the man, “You better get more money out.”
The auctioneer laughed and the state rep wanted to know my name and where I was from.  The state rep left shouting, “You will hear from the Speaker.”
A number of years ago, Dr. George Green was our state rep for Greene, Hancock and Putnam.  His roommate at North Georgia College was Tom Murphy.
Once a month, Dr. Green, at his home on Lake Oconee, would have Tom Murphy and his friends down for barbecue, fishing, boat-riding and poker games.
Tom Murphy loved to play poker.  I got to know the Speaker, and when I would come in the room, he would shout, “That man got my suspenders!”  We ended up being good friends–both like good jokes.
Years went by; the Talmadge suspenders were on the wall at the paper office in Greensboro.  I read an article by Dink NeSmith, one of the most respected journalists in Georgia, about the Talmadge home in McRae having a new owner and putting Talmadge memorabilia in the home.  I contacted Mr. NeSmith, who is a friend of the man of the home.  I wanted the suspenders to go back to Telfair County.
Later, Dink NeSmith stopped by my office, climbed on the desk and took the suspenders down, taking them back to Talmadge Country.
Without my respect for Dink NeSmith, they would be hanging in my office 150 miles away.  They never would have gone home where they belong.
…
Carey might have used a few Crayolas to color-up my side of the story, but I’m honored to take Ol’ Gene’s suspenders to Sugar Creek.