The world must unite against ISIS

The globe’s waistline is bulging at the equator—all 24,901.55 miles.  When you stretch the 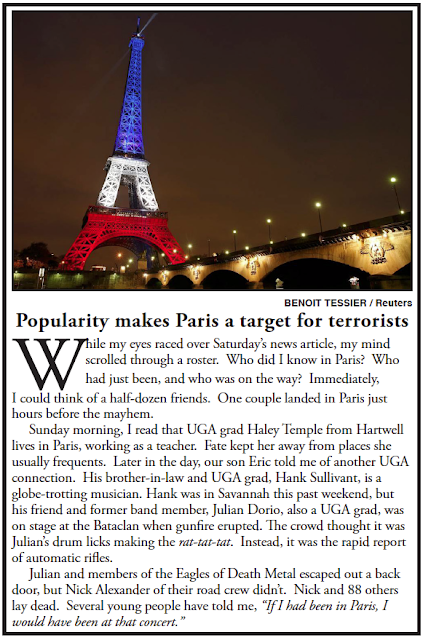 measuring tape from Georgia’s capital, Atlanta is about 4,370 miles from Paris.  But when you consider what happened in Europe’s City of Light last Friday night, our expansive world has shriveled to a scary picture that every American can hold in his or her hands.

That’s what I was holding at 5:30 Saturday morning.  In the blue light of my smartphone, The Atlanta Journal-Constitution’s headline screamed: “MASSACRE IN PARIS.”   And since that jolt of horrific news, I have been wondering—like you—what can be done to eradicate this reign of terror by ISIS?
The religions and politics of the Middle East are—and have been for at least 3,000 years—complex.  That means there are no easy answers, but this I know.  We cannot let bullies with bombs strapped to their bodies cower the rest of us into the shadows of our lives.
So what do we do?
I think we learned from the mistake of post-9/11 invasions.  I understand why we stormed into Iraq.  I supported sending troops to make bad guys pay for their atrocities.  But looking back, we relied on faulty information.  There had to be a better way than “boots on the ground.”  Inside those boots were thousands of brave men and women.
The endless war wrecked our economy.  We have spent more than $2 trillion we didn’t have.  Now, we are in a china-shop syndrome: “You break it.  You buy it.”  We’ll be paying for the rebuilding of Iraq, Afghanistan, et al forever.
Then there are the lives—oh, my Lord, the lives—that were valiantly sacrificed as freedom fighters.  And warriors continue to limp home, wounded physically or mentally.  My family has been spared from the war’s grief and misery, but that doesn’t stop me from hurting.  Where American troops go, my heart and prayers go with them.
Sunday morning, I got an e-mail from Alvin Leaphart.  Here is part of what he wrote: “The attack on Paris is only the beginning.  Everyone is at risk.  The idea is to make us and others fearful, spend enormous amounts of money on security, and make people afraid to go to public events, all which will destroy our economy, not to speak of our way of life.”
Alvin is right.


That’s the plot of ISIS.  The attorney said, “Russia and the United States have a common enemy.  We need to stop playing around.  Our leaders need to quit with the diplomatic rhetoric, and join with Russia, destroy ISIS.  And when the dust settles, deal with our differences.”
If ISIS can massacre 129 in Paris, terrorists can bring horror and bloodshed to our soil, again.  If ISIS can blast a Russian airliner out of the sky, they can target our airlines. Partnering with our old nemesis, Russia, may sound strange.  However, we do have a common enemy.  In fact, the fight should be the world—including Muslims who abhor violence—against ISIS.
Regrettably, terrorist cells are much like fire ant mounds on your lawn.  You destroy one, and two more pop up nearby.  Still, we cannot let these Islamic State jihadists paralyze the world.  Francois Hollande, president of France, is right, too.  Friday’s attack was an “act of war.”
So what do we do?
As big as the world is—all 24,901.55 miles around its middle—there’s no room for suicide bombers and crazed assassins who machine-gun helpless masses.
Sadly, we have been driven to the barbaric intersection of kill or be killed.