Carswell family grateful for the gifts of faith, hope and love

On the eve of Christmas, these words—faith, hope and love—have more meaning than ever to Don Carswell.  Since our Jesup school days, I’ve seen Don once in the last 50 years.  But after talking to his classmate and our mutual friend, the Rev. Ed Bacon, on Dec. 12, I knew Don had a Christmas story to share. It’s not about a brightly wrapped box with a red bow.  It’s a gift of faith, hope and love.
The story starts in Naples, Fla., where his daughter, Elizabeth, 34, was struggling in her 24th week of pregnancy.  “She thought it was the flu,” Don said.  “It just got worse and worse.”  In early July, she hurried to Miami’s Jackson Memorial Hospital, a top neonatal facility.  Elizabeth’s illness was not the flu but acute myeloid leukemia (AML).  She spent a total of four months at Jackson Memorial, undergoing two initial intense rounds of chemo—while pregnant—at the Sylvester Cancer Center. Each failed to arrest her cancer.
By this time, Elizabeth was in her 32nd week of expectancy.  On Aug. 24, 4-pound Hudson was born by cesarean delivery.  Don’s newest of nine grandchildren was tiny but healthy.  His youngest daughter was not.  Sylvester administered two more unsuccessful rounds of chemo.  That’s when faith, hope and love took over.

Faith
Despite the solemn news, the Carswell family reached deep into the souls, embracing their faith.  With each prayer, they felt help would come somehow, somewhere.  The first contact was with the Leukemia and Lymphoma Society in White Plains, N.Y.  Ironically, they had lived there once.  The daughter of Peter Brock, incoming chairman of the Society, had been a high school classmate of Elizabeth’s oldest sister, McGee, 38.  The dots started to connect.
Dr. Louis DeGennaro, CEO of the Society, stepped in, along with Peg McCormick, RN, a clinical-trial specialist.  Don said, “Peg worked tirelessly one weekend to connect me with the City of Hope in Duarte, Calif. and Dr. Stephen Forman, Distinguished Chair in Hematology and Hematopoietic Cell Transplantation.”  The world-renowned stem-cell specialist called Don.  And after a 20-minute conversation, Dr. Forman invited Elizabeth for a consultation to see whether one of his trials might benefit her. 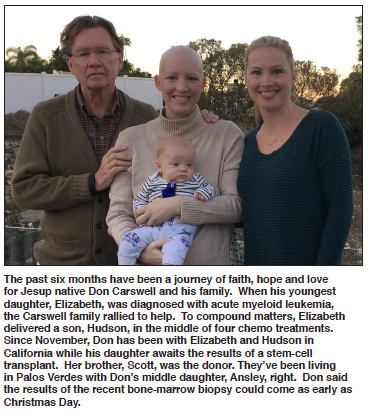 Hope
Thirty-six hours after that transcontinental conversation, Elizabeth and her dad—with Hudson in tow—were on a flight to Los Angeles.  The City of Hope, a cancer hospital, was giving the Carswell family renewed hope.  They moved in with Don’s middle daughter, Ansley, 35, who lives in nearby Palos Verdes.
When Elizabeth was cleared for the trial, the next hurdle was to find a stem-cell donor.  Enter Scott, 41, the eldest of the four Carswell siblings.    Following an intense five-day regimen of testing, Elizabeth’s brother was a 10-out-of-10 perfect match.  How’s that for faith and hope and an answer to prayer?
Don says, “Every bone in Elizabeth’s body has been radiated in an attempt to destroy the cancerous marrow.  It looks like she has a bad sunburn.”  And now that Elizabeth has Scott’s stem cells in her blood, there’s the wait.  A bone-marrow biopsy will be conducted this week.

Love
Medicine is powerful, but love works wonders, too.  And here’s where it’s-a-small-world dots connect in a surprising way.  The Carswells have the love and support of a hometown friend within minutes of the City of Hope.  Don’s Wayne County High School classmate, Ed Bacon, is Episcopal rector of All Saints Church in Pasadena. Dr. Forman, a Jew, attends Ed’s services. Ed labels Elizabeth’s doctor a saint.  Don adds an enthusiastic Amen.  “If they come any better than Stephen Forman,” Don says, “they would have wings.”
“We still have a long way to go,” Don says, “but we are reminded constantly how wonderful people are.  Imagine, we even have a Buddhist in China praying for us.”  This diverse, global circle of friends is praying for Elizabeth’s continued recovery.   At the top of their prayer list is a good-news report, hopefully on Christmas Day.
In the meantime, Hudson is 14 pounds and growing.  He, too, will one day learn that the best gifts aren’t wrapped in festive paper and placed under a lighted tree.  His family will read him the words found in 1 Corinthians 13:13:
“And now abide faith, hope, love, these three; but the greatest of these is love.”