Just in time for Santa: Zirkle to Alaska 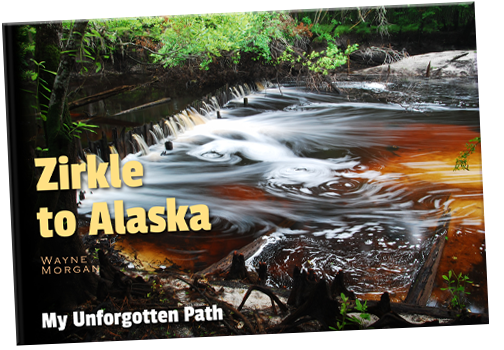 When Wayne Morgan got his pacemaker installed, the doctors must have slipped in a hefty pack of Energizer-Bunny batteries, too.  The Brantley County outdoor photographer just keeps on going and going and going.  There’s no way to count the clicks on his Nikon cameras since the 1999 heart procedure.  But I can calculate the number of books that he’s published in the past four years—five.
In 2011, I became a Wayne Morgan fan—three pages into his first book, Satilla Solitude.  By the time I had drooled over 175 jaw-dropping images, I was determined to get to know the man behind the lens.  That meeting was the beginning of a friendship.  Wayne shares his ideas for my whatcha-think thoughts.  And from the sidelines, I comment and cheer for this self-taught wizard of photographic artistry.
Our first visit was at Jerry J’s in Nahunta.  I’ve never eaten grits and eggs in an art gallery.  Patrons like Jerry J’s food, but they rave about Wayne’s photographs hanging, around 360 degrees, on the walls.  Nibbling on a biscuit, I followed Wayne as he explained the background of each framed picture.  When we got to the scenes of the tea-colored water sluicing through the snaggle-tooth metal dam on the Little Satilla River, Wayne’s Nikes squeaked to a stop.


“This is Zirkle,” he said, beaming as if he was admiring his first grandchild, Kase.
After Wayne sipped—one last time—on his plastic tumbler of iced tea, we piled into his silver pickup.  He aimed the Toyota toward the Brantley-Pierce county line.  Even through an early-morning cloud of mosquitoes, I could see Zirkle was his special place.
And when you pick up a copy of his latest book, Zirkle to Alaska, you’ll see—on its cover—what we saw that morning.  The 100-year-old former logging village dam does magical things with brownish-black water swirling between its rotten-like teeth, stretched between the sugar-white sandy shores.  It’s mesmerizing, and Zirkle is the namesake of his publishing company. (Visit zirklepress.com.) 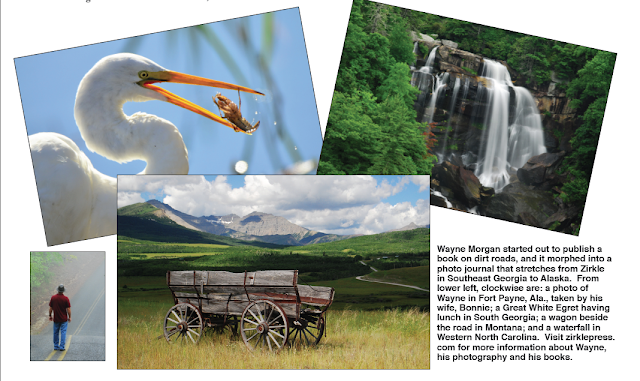 Wayne loves the Satilla River and the Little Satilla so much, he got my heart thumping.  It’s Southeast Georgia nature at its best.  It’s also a make-you-spitting-mad example of how people can rob God’s grandeur of its pristine beauty.  Litterbugs were on their way to turning the two rivers into a floating trash heap.
Scowling at potato-chip bags, soft-drink bottles, beer cans, tires, mattresses and even old toilets, Wayne said, “We must do something!”  Six months later, Kase for the Environment was off the press.  Wayne’s pictures illustrated the help-save-our-rivers message, as I wrote in the voice of his then 3-year-old grandson, Kase.  This happened in the midst of compiling his coffee-table book on the Okefenokee Swamp, with the help of Land-of-the-Trembling-Earth expert, Don Berryhill.
That’s the Energizer-Bunny way Wayne goes about things.  And all the while, he was talking about another idea: a book on dirt roads.  One thing led to another, and the notion morphed into a grander theme: out-of-the-way places from Zirkle up to Alaska.
Taking time off from his diesel-mechanic job at the CSX railyards in Waycross, Wayne logged thousands of miles—with his camera—across Georgia to Florida, Alabama, North Carolina, Virginia, Tennessee, Montana, Wyoming, Maine, Canada, California and Alaska.  From too-many-to-count photographs, Wayne selected 200.
On Christmas Eve, if you hear Santa tromping on your roof and then a long pause before he slides down your chimney, I can explain the delay.  Old Saint Nick was taking one more admiring look at Wayne’s newest masterpiece: Zirkle to Alaska.