Staring at the 45-year-old man behind the salt-and-pepper beard, I didn’t recognize him at first.  “Like father, like son” describes the valor in the lives of Bobby Johnson and his son, Shannon.  Both men died young—as heroes—attempting to save co-workers. 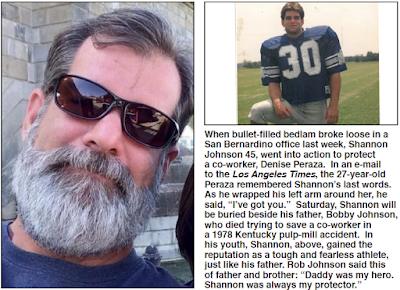 Then I read a few paragraphs of the California story.  That’s when Shannon Johnson’s identity couldn’t be disguised any longer.

What happened on Dec. 2nd in San Bernardino sent shock waves across our nation, including tremors of grief in his parents’ hometown—Jesup.    For Shannon, risking his life to save someone else’s is exactly how his dad died in 1978.
As heartbroken as a mother can be, Barbara Hilliard Johnson Pollard is not surprised by what her son did.  When he was a boy, Barbara would ask, “Shannon, why did you do that?”  His answer: “Mom, I just did it.”  And that’s what he just did last week.
When a terrorist couple sprayed bullets in a county health office where he worked, Shannon acted as a human shield to save a woman’s life.  This weekend, he will be laid to rest—beside his father—in the Jesup City Cemetery.
I remember his parents, my classmates, 50 years ago.  Bobby was dating his high school sweetheart, a brunette beauty named Barbara Hilliard.  Bobby and I were teammates on the Yellow Jackets football team.  Coach Clint Madray praised his scrappy defensive end this way: “Bobby Johnson doesn’t weigh 140 pounds, soaking wet … but he’s all heart.  Pound for pound, you won’t find a tougher player.” 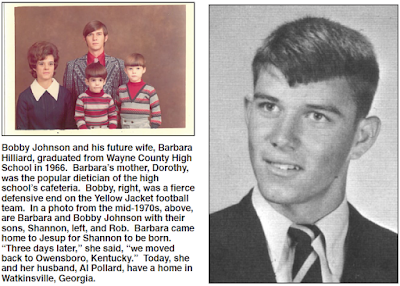 You had to see it to believe it.  In 1965, the Dodge County Indians were driving on us.  Bobby was on the sidelines with a banged-up knee.  But that didn’t keep him from tugging on the coach’s elbow.  Coach Madray relented and barked, “Bobby, get that quarterback!”
Bobby hobbled onto the field with a stiff leg, looking a little like Chester, Sheriff Matt Dillon’s deputy on TV’s Gunsmoke.  On the first play, Bobby—with cat-like quickness—sacked quarterback Jim Lowery 10 yards behind the line.
Fast-forward 13 years.  Bobby was on a pulp-mill shutdown assignment at Western Kraft, in Hawesville, Kentucky.  His walkie-talkie signaled a co-worker in danger.  Just as his son did in 2015, Bobby lunged into action.
When Bobby got to the bottom of the steep ladder, he hoisted the 210-pound man onto his shoulder and started up.  Maybe he slipped.  Maybe the toxic fumes overcame him.  Whatever the case, Barbara learned later that Bobby hit his head in the fall, and her husband died—a hero—in eight inches of whatever was in that industrial sewer.


Monday, I talked with Barbara and her husband, Al Pollard, who became a father figure to her sons, Shannon and Rob.  Athletics bonded them early.  Al, a former Georgia Bulldog, was a coach.  His step-sons were athletes.  Shannon, like his father, was tough and fearless.
Barbara and Al remember a seventh-grade football game when Shannon’s shoulder “popped out.”  On the sideline, he popped it back into place and went back in to score a touchdown.  You can’t deny DNA, and Shannon got a double dose.  His uncle, Bobby Hilliard, was a legendary scrapper, too.
In the eighth grade, Shannon was catcher on the varsity baseball team in the GISA league.  He was the leading hitter, batting .422, making all-state honors five years in a row.  As a linebacker and running back, he was all-state every year in high school.  In one playoff game, Shannon rushed the ball 44 times for 240 yards and three touchdowns.
Shannon Johnson was more than an athlete.  He had scholarly ambitions.  He cherished family, friends, conversation, laughter, music and pets.  Shannon loved life so much, he was willing to sacrifice his own for someone else’s.  And that’s how he should be remembered:  an unselfish hero.
“Like father, like son.”