Sometimes, I flip a coin to see which route I’ll take from Jesup to Athens.  And if I don’t put a quarter to tumbling in the air, I’ll opt for Highway 15 over U.S. 441.  Highway 15 doesn’t have the four-lane, 65-mph stretches, but up through Wrightsville just feels more natural.  Besides, I’d miss what Ross Smith and the Old Savannah Crew (OSC) were saying on the side of their Bulldog Barn south of Sandersville.
In just a few words, Ross and his Washington County friends let you know how they feel about what’s going on in the Bulldog Nation.  This clever bunch, OSC, telegraph their message on the lapboard side of an old barn on the eastside of Highway 15.  They must sleep fast, if they sleep at all after a Georgia game.  On the way up to Sanford Stadium, you will see one message.  The next morning—on the way home—you’re apt to see another message.
In these what-in-the-world-will-they-think-of-next times, the OSC rely on old-school tactics of communication.  Ninety-five years ago, Burma Shave sold lots of lather to get rid of whiskers with their catchy roadside phrases.  How about those iconic “See Rock City” signs painted on roofs of barns?  They made me want to see Rock City, and I wasn’t satisfied until I did.
I’m not satisfied on my Highway 15 jaunts until I see what OSC have to say.  About two weeks ago, the side of the barn was blank.  Last week, Ross and Company welcomed 2016 with “Be Smart  … commit to the G.” 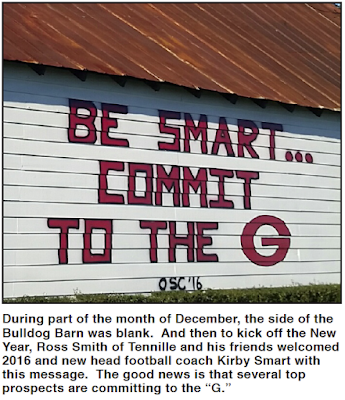 Smart, as in Kirby Smart, has just wrapped up his national-title duties at Alabama.  You can bet the eyes of the Red and Black will be watching his every move.  And you can be sure that OSC will be ready with their paint brushes.
Next time you’re through that stretch of Highway 15, see what they have to say.