No, thanks, we don’t want your toxic trash

If a sledgehammer had been slammed on my thumb, I couldn’t have yelped any louder.  And that was just thinking of the possibility that coal ash, a life-threatening pollutant, was going to be dumped into Wayne County.
No.
No.
No.
And hell no!
Pardon my language.  But if you aren’t cussin’ mad about the idea of our backyard being turned into a dump so someone else can get rid of what they don’t want in their backyard, well, what does it take to get smoke coming out of your ears?
Before you go to sleep tonight, you need to peruse an article in Environmental Health News by Brian Bienkowski (http://www.environmentalhealthnews.org/ehs/news/2016/jan/coal-ash-environmental-justice-epa-civil-rights)  If you don’t have Internet service, stop by The Press-Sentinel.  We will give you a copy of the story. Here’s a hint—from Environmental Health News—of what should give you nightmares:
“There are about 200 sites nationwide where coal ash has tainted air and water.  The most recent disaster was in 2014 at Duke Energy’s Dan River Steam Station in North Carolina where 39,000 tons of coal ash and 27 million gallons of wastewater gushed into the Dan River. … Catchment areas leave those (people) nearby subject to leaks, discharges and spills.”
So I ask, “Why would we want our quality of life and our natural resources put at that kind of 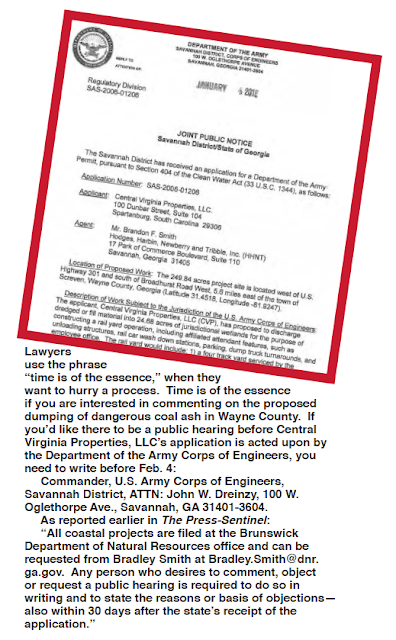 The company proposing to contaminate our county with this nasty stuff is Central Virginia Properties of Spartanburg, S.C.   The company’s application to the U.S. Corps of Engineers seeks to haul in trainloads of coal ash and pile it in an area between U.S. 301 South, Broadhurst, and U.S. 84, Screven.  Let’s hope our federal government is looking out for us.  Let’s also hope the feds will listen: “We don’t want our lives and our environment endangered by carpetbagger-like profiteers.”
Wayne County commissioners were unaware and blindsided by this proposal, until The Press-Sentinel shined some light into this dark and dangerous corner.  Your newspaper’s roots go back to its 1865 founding.  You have our promise that we will do everything we can to follow this issue and keep you informed, now and for the next 151 years.  We are pleased our commissioners are rallying to see what they can learn.  I hope this frightening plan gets road-blocked before it’s too late.
Are you fired up yet?
If not, read John Grisham’s Gray Mountain.  It’s a novel, but the facts are scary, very scary.  The arrival of coal ash in our community brings no good news, even if it meant 500 jobs. And it won’t.  What they want is to dump on us and cram their pockets with cash. With potential new neighbors like that, who needs enemies?
If Republic Services, operator of the Broadhurst Landfill, is behind this ploy to bring these harmful materials here, we need to know.  And if that’s the truth, shame on Republic. The possibility of dumping coal ash is a bait-and-switch tactic that makes no sense at all for the citizens of Wayne County.
Evangelist Billy Sunday once said, “Very few souls are won after 20 minutes.”  I’m done preaching—for now.  And I hope you, too, are mad enough to make even a preacher want to cuss. But let’s don’t just fuss and cuss.  Let’s do whatever it takes to stop these unwelcomed trainloads of polluted filth.