Randall Aspinwall isn’t the only one who is worried

​Randall Aspinwall and I go back to the glory days of The Pig.  Randall and his parents, Sine and Vada, were on one side of the counter.  I was on the other side, spinning on one of those tall, ruby-red, vinyl-topped stools, closest to the open pit.  It was there my life-long love affair with hickory-smoked pork began. I’ve sampled barbecue across America.  I always compare it to my first bite at the Aspinwalls’ restaurant, a must-stop for travelers in U.S. 301’s heyday. 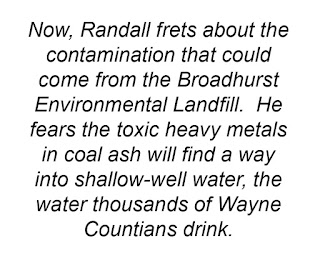 ​And when my cell phone vibrates—flashing Randall’s number—I’m eager to hear what my friend has to say.  Somewhere in the conversation, The Pig will get a mention.  Before long, we’ll review what’s happening on the Altamaha. Not too deep into the visit, we’ll reminisce about our late football coach, Clint Madray.
​Big Clint put hair on our teenage chests while teaching us the value of “having guts.” We played better teams, but no one outhustled the Yellow Jackets.  One of his make-a-man-out-of-you drills was Blood on the Moon.  Players got into a down stance on either end of a 12-foot plank. When the whistle blew, the two charged each other.  The object was to see who could push whom to the end of the board.  “I don’t want to see nothing but elbows and bleep-holes!” our coach would growl.  And if somebody didn’t show enough guts, he’d roar, “Even a dead man has one more step!”
​Recently, Randall called.  We warmed up on barbecue, football and river talk.  Then, his voice shifted to a serious tone.  “What about this coal ash?” he asked.  I’m no scientist, but I told him what I had read and heard.  “I’m having trouble sleeping, just thinking about how bad this will be for Wayne County,” he said.
Just as his brothers, Al and Mike, were, Randall is a gifted craftsman.  Sine and Vada’s boys grew up unafraid to get their hands dirty.  Today, Randall, a Rayonier retiree, is one of the go-to men if you want a shallow well.  Over the years, he’s put down hundreds of the inexpensive water sources. “Not everybody can afford a $5,000 deep well,” he says.  So, people opt for the economical solution—a shallow well.
Now, Randall frets about the contamination that could come from the BroadhurstEnvironmental Landfill.  He fears the toxic heavy metals in coal ash will find a way into shallow-well water, the water thousands of Wayne Countians drink.
​To understand how close to the surface the water table is, especially in areas such as Broadhurst, all you need is a piece of pipe and water gushing from a garden hose.  In fewerminutes than feet to go down, you can wash down a shallow-well casing in a jiffy.  I’m no Aspinwall, but even I have accomplished that in our sandy dirt.  That proves whatever spills into our leaks-like-a-sieve soil won’t take long to get into the shallow wells.
​You can be confident, with the billions in resources available to Republic Services, the landfill owner has found a busload of paid experts to tsk, tsk at Randall’s worries. He is not alone in his worries.  If “money talks,” big money shouts! I am suspicious about the apparent coziness of companies such as Republic with our government’s environmental regulators.  Here’s an example.  If I am wrong, how did toxic coal ash get downgraded to a nonhazardous material?
​Like Randall, I’m having trouble sleeping these days.  Coal ash is our “Blood on the Moon,” 50 years later.  But even when I die, I’ll have one more step to fight for Wayne County. 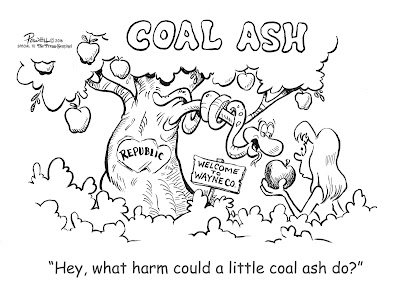 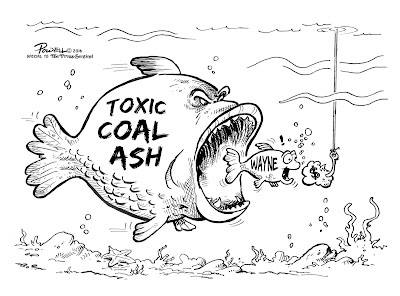