Republic, show us that you really want to be a good neighbor

Thirty-two years ago, I was paddling a skiff through the swamp.  Up front, 8-year-old Emily was swatting mosquitoes while shaking her pigtails and pink bows.  “Daaaaad,” she drawled, “why does God make us have ticks and red bugs and these mosquitoes anyway?”  I laid the paddle across my knees and said, “That’s His reminder that we aren’t in Heaven yet.”
Today, Emily and Tom’s four boys—along with their four cousins—think the Altamaha River swamp is about as close to Heaven as you can get.  They are learning to love Wayne County, just as their gray-headed grandpa does.  This is a special place.  And I am one, among thousands, who abhors the notion that an outsider, a conniving corporate carpetbagger, can put its greed ahead of what is safe for those of us who have loved this place for as long as we can remember.
Republic Services, the Arizona-based conglomerate, should be ashamed of the way it slick-talked its way into our corner of the world.  Waste-management companies are notorious for targeting poor, rural communities.  They use the seductive power of money-filled promises.  And they knew how little most of us knew about the dangers of toxic waste such as coal ash.  Republic figured Wayne County would bite the money bait.  Sadly, we did. 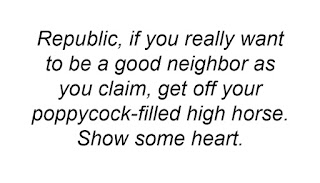 Now, Republic is saying, “But we don’t have any contracts to haul in coal ash.”  It actually wants us to believe that, like its 2005 ruse of “minor modifications to the contract.” I am surprised Republic didn’t offer to sell us some “oceanfront property in Arizona,” about which George Strait sings.
If Republic doesn’t have plans to further contaminate Wayne County, why are officials with Georgia Power, a coal-ash creator, and CSX, a coal-ash-hauling railroad, trying to con me into believing this toxic material “isn’t as bad as some of the other things” being dumped in Broadhurst?  I say: “Fool me once, shame on you.  Fool me twice, shame on me.”
From the very beginning of this hoped-to-be-secretive scheme, Republic has been smug.  It knows the way through the legal and regulatory maze, and the public be damned.  You and I are that public.  By now, I am not willing to trust Republic one whit.  Its promises are hollow.  At Wednesday night’s meeting, I hope an overflow crowd makes that clear to the company that tried to trick us—again—by tiptoeing its rail-spur application through the Corps of Engineers.
Wayne County’s name—its positive brand—is about to be sullied if the rail spur is allowed.  Soon to follow will be trainloads of God-knows-what waste, including toxic coal ash.  The consequences to our good name will be devastating, not to mention the negative impact on our property values.  Imagine the difficulty we will have marketing our community to potential newcomers as an ideal, safe place to live, work and play.
Republic, if you really want to be a good neighbor as you claim, get off your poppycock-filled high horse.  Show some heart.  Back off your rail-spur plan.  Commit to keep toxic coal ash out.  Re-negotiate a contract that doesn’t turn our community’s image into that of an environmental prostitute, ruining our respected name.
Before you took advantage of us, Republic, we were—despite the pesky ticks, red bugs and mosquitoes—almost in Heaven here in Wayne County.  But if you continue with your public-be-damned plan, Republic, your sneaky reputation deserves a hellish train wreck—right in the middle of Wall Street. 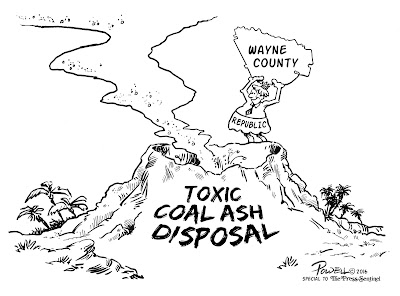 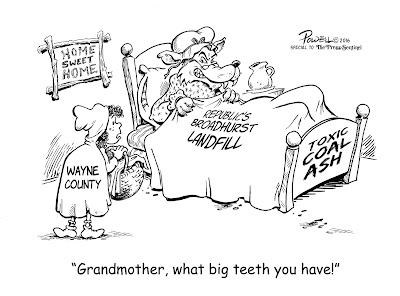