A fight song for our David-and-Goliath coal-ash battle

A dozen years ago, my thatch began showing frosting signs. Now, I just call it possum-blond. Under my mostly-silver-with-a-little-brown hair is an imaginary jukebox. It’s loaded with songs, music and lyrics for all occasions.
Since mid-January, the song called up most often is by Nashville artist Buddy Jewell. I carry his CD in my truck. When I need inspiration in our David-and-Goliath coal-ash battle against Republic Services, I punch the play button. Here’s a snippet of the lyrics: 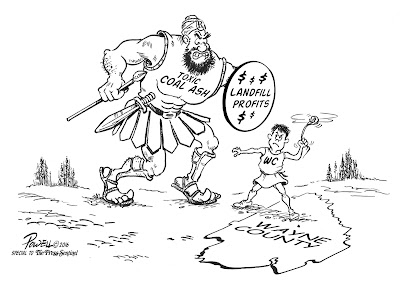 “I guess it started when I was a kid
If you said I couldn’t, I did
Always had a stubborn streak, put a wall
In front of me
And I’ll find a way to get around it”
Buddy tells his story—which could be Wayne County’s saga in this struggle to save our environment—by singing: “I wanna thank everyone who told me no.” If you listen to naysayers, they’d have you believe there is no way that our tiny community can be victorious over Republic, a $9 billion landfill Goliath. That’s why we must rely on our stubborn streak to get around the wall of no’s.
If we had wilted on the first chorus of no’s, the Corps of Engineers would have likely granted Central Virginia Properties’ permit to destroy 25 acres of wetlands to build a massive rail spur. Instead, the decision on the application continues to be delayed. Your voices were heard. I believe both the Corps and the state’s Environmental Protection Division (EPD) are willing to listen even more.
Thursday, I will join a group traveling to Atlanta to talk and listen as the EPD ponders how to establish new guidelines for coal-ash handling and disposal. Our state can cut and paste the federal rules into Georgia’s laws, or it can be more stringent. I will always believe the Environmental Protection Agency (EPA) got too cozy with Washington lobbyists, resulting in the reclassifying of coal ash as non-hazardous. Again, ask the people of Flint, Mich., what part of lead in their water is not hazardous to their health.
I contend the EPA, under pressure from deep-pocketed lobbyists, fumbled the ball. That’s why the May 12 meeting in Atlanta is so important to Wayne County and all of Georgia. Coal ash, laden with toxic heavy metals, isn’t something we want in our ultrasensitive ecosystem. The EPD can recover that federal fumble and live up to its name: Environmental Protection Division.
If the EPD is willing to listen, we cannot afford to miss the opportunity to speak up. The meeting is open to the public, but you need to register: http://geco.georgiaair.org/eventregistration/EventDetails.aspx?eventid=58. And before you mutter: “Atlanta is a long way … up there and back,” think about how long the contamination of toxic coal ash will haunt us. A day’s investment is nothing in the big picture of forever. Your great-great-grandchildren will reap the rewards of your invested time and energy.
Yes, this is short notice. However, I remind myself—regularly—if it weren’t for the last minute, some of the best things in life would never happen. Last-minute public outcry has gotten us this far. So, no, it’s not too late to sign up and jump in a northbound carpool.
But before you go, download Buddy Jewell’s “I wanna thank everyone” onto your digital gadget. Buddy has given us the perfect fight song against a wants-to-dump-coal-ash-on-us Goliath. Play it over and over as you roll up I-75.
And while you are humming along, set your jaws—like a stubborn Altamaha River snapping turtle. We can’t turn loose until it thunders. 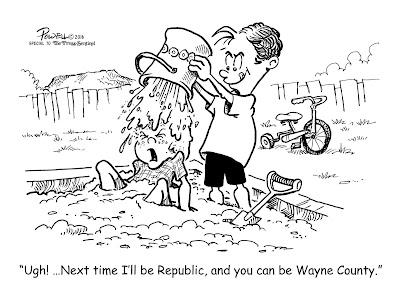