Cuba’s so-close-yet-so-far-away mystique made me check the yes-I’ll-go box.  Last year, the six-day adventure seemed like a grand idea.  I’d been eager to see Havana before our Caribbean neighbor’s fleet of vintage cars rusted to a halt.  There was the allure of Cuba’s glitzy days of movie stars, mobsters and casinos.  I had heard and read the stories, and I wanted to step inside Hotel Nacional de Cuba.  Ernest Hemingway’s home was another draw.  So, I told the Southern Newspaper Publishers Association (SNPA), “Yes, I’ll go in April. My check’s in the mail.”

Then came the Central Virginia Properties, LLC surprise attack on 25 acres of wetlands, via a rail-spur application to the Corps of Engineers.  Republic Services had been planning this move for a dozen years or longer.  Some county officials knew of the rail-spur plan, but 99.99 percent of us were blindsided.  Since mid-January our community has been dumbfounded and horrified by the proposal to dump, daily, up to 100 railcars—loaded with toxic coal ash—in Republic’s Broadhurst Environmental Landfill.

Citizens are perplexed how Republic gained a 50-year contract with such one-sided terms.  Speaking at the March 16 public meeting, Lindsay Thomas borrowed a line from Jerry Reed’s song; “Republic got the gold mine, Wayne County got the shaft.”  Republic continues to point out how much money it will be paying us for piling mercury, arsenic, beryllium and lead-loaded coal ash in our sensitive ecosystem.
No, sir, money or promises won’t ease my mind. Too much is at risk.
And the closer the Cuba trip edged on April’s calendar, I wondered: “How can I leave now?”  I was ready to forfeit my prepayment.  Family and friends insisted,
“You need a break—go.” Easily said.  Not so easily done.  All the way to the Atlanta airport, I talked to myself: “Let it rest.  Plenty of others are carrying on the fight.” Indeed, I am proud of how our community has rallied in this David-and-Goliath battle.

I had almost shifted into neutral when I stepped on the moving sidewalk heading to the Delta gate.  In slow motion, I was viewing the historical displays on the wall when a giant poster of Ted Turner appeared. Stepping off the people-mover, I circled back.  I wanted to read his words one more time:  “We have a beautiful, fragile planet where all people and all things are interdependent and interconnected.  Every action or inaction has an impact—good or bad. …”

The Altamaha River Basin drains one-quarter of our state into the Atlantic Ocean.  Some coal-ash dumps, such as the one in Banks County, have dense bedrock beneath them.  Our soil is sandy.  Leaks—and there will be more leaks—go down and spread through watery arteries which work their way to the coast.  Broadhurst sits atop the Floridan Aquifer, a drinking-water source of millions.  Broadhurst is simply the wrong place to put toxic coal ash.

Ted is right.  We are interdependent on each other to protect our planet.  Why can’t Republic and CSX understand that, too?

So, what did I think about while in Cuba?

And, when will I tell you about my adventure, 90 miles off the tip of Florida?

As they say in Havana, “Luego.” 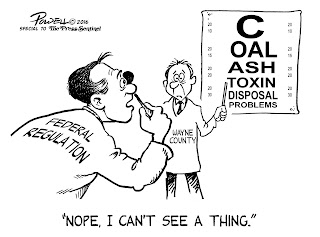