You don’t solve one problem by creating another

(The following remarks were made at the Georgia’s Environmental Protection Division’s hearing in Atlanta on July 27.)
Thank you, EPD, for hosting this hearing today.  And on behalf of Coastal Georgia, I thank you for next week’s hearing in Brunswick.  What Republic Services is proposing, with its enormous toxic coal-ash dumping plan, is of grave concern to the people of Southeast Georgia.  Facing the risk of inevitable heavy-metal leaks, we appeal to this agency to protect us.
The EPD is making progress with its coal-ash rules, but it is not going far enough.  Georgia’s environment would be better protected if the EPD backed up and restricted toxic coal ash from all municipal solid-waste landfills.
Unfortunately, the proposed new rules wouldn’t offer any enhanced protection to the environment or local citizens at municipal solid-waste landfills such as Broadhurst.  Does that mean the EPD is saying to Coastal Georgia, “Oh, well.  You are just going to have to live with the threat of coal-ash contamination.”  Dr. Norman Vincent Peale said: “There’s no right way to do a wrong thing.” There’s no right way for the EPD to turn its back on the people of Coastal Georgia, considering what Republic’s planning. 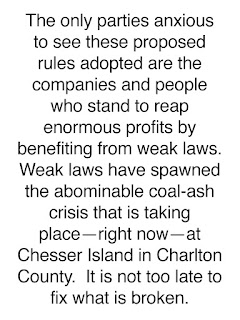 However, I am pleased to report that on July 25 Republic’s area president, Drew Isenhour, sent a letter to the EPD withdrawing, for the time being, Central Virginia Properties, LLC’s application concerning coal ash … “in consideration of an ongoing conversation within the community about coal combustion residuals.”  This is a very good start, and Mr. Isenhour’s gesture is greatly appreciated by the people of Coastal Georgia.
In Georgia, private municipal solid-waste landfill operators can seek to expand a landfill’s footprint by filling in wetlands to store coal ash. Under prior and proposed rules, that would be potentially a “minor” modification.  What’s minor about that?  The EPD should close that major loophole.
And Georgia’s rules should require public hearings for any landfill that proposes storing toxic coal ash.  The people have a right to know if toxic waste is about to be dumped near them.
Georgia’s rules should acknowledge size as a factor in determining whether a modification is major or minor.
In the case of Broadhurst, Republic used a series of minor modifications to get what it wanted—a major change to its landfill—one which could accommodate up to 10,000 tons of toxic coal ash per day.  A single dump truck of toxic coal ash is one thing.  One hundred railcars—day after day—is grossly different.  To adequately protect our environment, I repeat: “This major loophole must be closed.”
The proposed rules lack details concerning the handling and transportation of toxic coal ash.  There are issues of fugitive dust blowing and polluting.  What about spillage on highways and railways?  What about the toxic residue at transfer and washout stations from water runoff?
Simply, there are too many unresolved issues.  I urge the EPD to delay its presentation to the DNR board until a more comprehensive set of rules can be recommended.  Until the Broadhurst coal-ash controversy erupted, Georgians were basically unaware of this issue and its potential dangers.  I believe the 10 million Georgians deserve this topic to be fully vetted before the General Assembly in 2017.
The only parties anxious to see these proposed rules adopted are the companies and people who stand to reap enormous profits by benefiting from weak laws.  Weak laws have spawned the abominable coal-ash crisis that is taking place—right now—at Chesser Island in Charlton County.  It is not too late to fix what is broken.
You don’t solve problems by creating another problem. If the EPD doesn’t stand firm, that’s exactly what is going to happen to communities all over Georgia.  Someone else’s coal-ash problem is going to be dumped elsewhere, creating enormous environmental problems for others.
The first time I visited the DNR’s website, I read this quotation by Theodore Roosevelt: “The nation behaves well if it treats natural resources as assets which it must turn over to the next generation increased, and not impaired, in value.”
Unless the EPD and ultimately the DNR adopts much more stringent regulations on toxic coal ash, Georgia’s assets of natural resources will be greatly impaired in value.  I am sure that’s not a legacy any one of us wishes to turn over to future generations.