Not long after Wilbur and Orville Wright made Kitty Hawk famous with their flying machine, airplanes became a global fascination.  America and Europe jumped into a race to see which continent would win superiority with the idea that men could actually fly.  Before long, barnstormers were swooping into rural towns, using cow pastures as grass landing strips.
Not everybody was excited to plunk down a dollar to try a ride into the clouds. I heard the story of one farmer who, after much coaxing from friends, climbed into a small plane for an aerial view of his dirt-road-laced world.
When the pilot touched the craft back on earth, the farmer’s friends rushed to get a report.  In unison, they shouted, “Well, how’d you like it?”  Waiting until he got some color back in his cheeks and knuckles, the farmer finally said, “I didn’t really trust it, so I never put all my weight down on it.”
That sums up my feelings about these thin plastic coal-ash liners Republic Services is trying to sell us on.  I keep a small-disk sample on my desk.  Several times a day, I pick it up and think: “And this is going to last for 100 years, 300 years … forever?”
Without supportive historical data, Republic wants us to trust its claim that the liner will protect our environment—forever.  If the waste-haulers get permission to dump 10,000 tons of toxic coal ash in its landfill, day after day, Wayne County could become the largest deposit of this contaminating substance in the United States.  Towns get branded with nicknames.  Atlanta: Hotlanta.  New York: the Big Apple.  New Orleans: the Big Easy.  And back in the day, Ludowici, our across-the-Altamaha-River neighbor, was
tagged: Speed Trap.
How many decades has it taken our friends in Ludowici to outlive that unfriendly moniker?  Our community could very well head down that negatively-viewed track if the U.S. Army Corps of Engineers grants Republic Services the permit to destroy wetlands to build
four miles-worth of rail spur adjacent to its Broadhurst Environmental Landfill.  Once CSX starts hauling in a projected 100 railcars per day of toxic coal ash, it won’t be long before our community gets a nickname we won’t like.  Picture this: “Home of America’s Largest Toxic Coal-Ash Dump” or just “Coal-Ash City.”
How hard have Jesup, Odum, Screven and Wayne County worked to build an image of “this is a place you’ll want to live, work and play”?  We’re hungry for newcomers and new paychecks, but we shouldn’t be so starved to welcome what Republic is proposing.
Coastal Georgia is the wrong place to take the risks being pushed by Republic.  Beyond Wayne County, think of our neighboring counties.  Thousands of paychecks from fishing and tourism are dependent on good water and a healthy environment.
Not long after the Wright Brothers’ success, passengers flocked to the Titanic because
they trusted its billing: unsinkable.  Where is that luxury liner today? Republic claims it has developed a landfill liner that won’t let toxic heavy metals—arsenic, lead, mercury, beryllium and others—“sink” into our groundwater and aquifer.  What about the dangerous fugitive
dust particles of toxic coal ash in our air?  What about the pollution from toxic coal ash slopping
off railcars and trucks as they rumble through the countryside?
Republic thinks it has a good plan, but I’m like the old-timer on his first plane ride.
No, sir. No, ma’am.
I don’t trust it.
I will never put all my weight down on it. 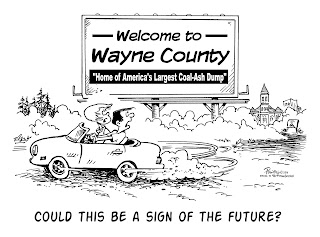