Wendell Berry is proud we grabbed ‘the bear’ by its tail

Toss a stone into the still waters of a pond and watch the concentric ripples spread.  That’s how to describe Wendell Berry’s impact.  Through tossing words—written and spoken—into issues, his influence has carried to the far reaches of the globe.
At first glance, you might mistake khakis-clad Wendell for a gentleman farmer, puttering around in his well-dented pickup truck.  He is a farmer.  And by all means, he is a gentleman.  But you can’t stop there.  He’s the first living person to be inducted into the Kentucky Writers Hall of Fame. Wendell has authored more than 40 books—novels, collections of short stories, essays and poetry.
Call it fate or just pure luck, but I am a latecomer to Wendell Berry’s world. After learning of my stance against toxic coal-ash dumping in Wayne County, a mutual friend, the Rev. Dr. Felix Haynes, insisted that I meet Wendell.  While attending seminary in Louisville, Felix lived with his family in Port Royal Baptist Church’s pastorium from 1967 to 1969.  That’s where he got to know
Wendell and Tanya Berry. 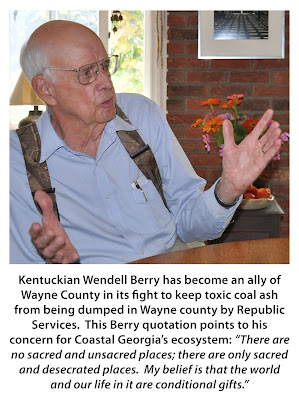 After a few letters and follow-up phone calls, Felix and I were on a 1,042-mile jaunt to visit with one of America’s most respected environmental activists. On a sun-kissed Sunday afternoon, we sat in Wendell and Tanya’s kitchen and compared notes.  Wendell’s been a student of our challenge to stop Republic Services from stacking millions of tons of toxic coal ash in Broadhurst.
Wendell’s seen—firsthand—how waste-management corporations invade rural communities, hoping to seduce them with easy money in exchange for carte blanche rights.  Companies, such as Republic, try to buy goodwill. The result is that places such as Wayne County become sacrifice zones or dumping grounds for other people’s problems.  I take that as an insult to you and me, as well as our future generations.  Wendell’s admonition is: “Do unto those down-stream as you would have up-stream do unto you.”
Wendell Berry is a devout, well-mannered man, but he doesn’t back down.  He helped organize Kentuckians for the Commonwealth. If it takes leading protests or staging a sit-in at the governor’s office, Wendell is fearless.
At one time, he gave his massive archives to his alma mater, the University of Kentucky, where he also taught—twice.  But when it became obvious to him that the university was too cozy with the coal industry, Wendell took his materials back.
In 2009, as he was giving his papers to the Kentucky Historical Society, he was quoted: “I don’t think the University of Kentucky can be so ostentatiously friendly to the coal industry … and still be a friend to me and the interests for which I have stood for the last 45 years.  … If they love the coal industry that much, I cancel my friendship.”  In 2010, he said, “The EPA knows that coal ash is poison.  We ask it only to believe in its own findings on this issue, and do its duty.”
Now, you see why Wendell has been following our David-and-Goliath saga.  With a chuckle, our ally said, “When you grab a bear by the tail, you can’t turn loose.” He’s proud Wayne County grabbed the bear’s tail, but he issued some news—good and bad.  The good news is that we can win the coal-ash war.  The bad news is coal ash won’t be the last bear to attack Wayne County.  That’s why we must decide, in his words: “What kind of people do we want to be?”
When our great-great-grandchildren—yours and mine—look back at the ripples we made in “the pond” of this coal-ash confrontation, I trust they will say of us, “We are grateful they listened to Wendell Berry.” 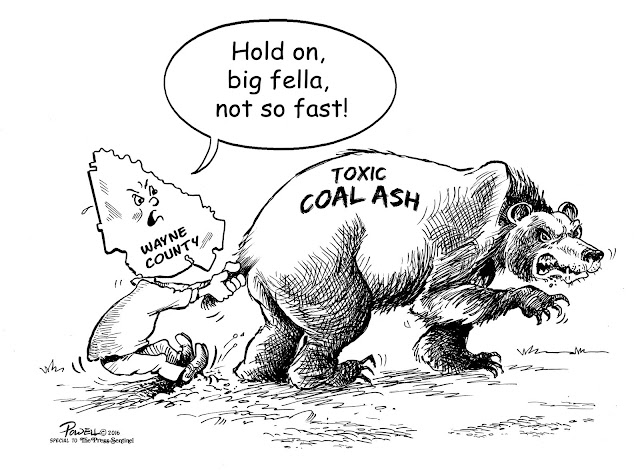