Wayne commissioners need to take good look in ‘The Glass’ 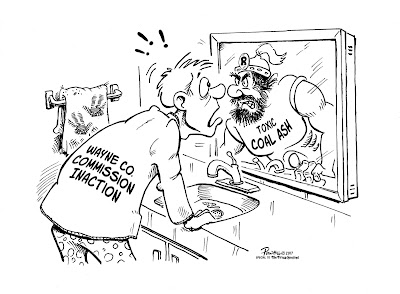 Somehow, a piece of my inherited DNA didn’t stick.  My mother, Marjorie, and my dad’s sister, Sue, could craft a poem on demand.  Give them a topic, and presto, they’d hand you a sheet of rhyme.  If that poetry-writing gene was handed down to me, it must have snuck out before I ever picked up my first pencil.
Nonetheless, I enjoy poetry.  My favorites are usually short and loaded with pithy advice.  When I reflect on the recent actions or rather non-actions of our Wayne County commissioners, concerning Republic’s rail-spur and toxic coal-ash plans, I think of Peter Dale Wimbrow Sr.’s four-verse poem. Here’s what Wimbrow penned in 1934:


The Man in the Glass
When you get what you want in your struggle for self
And when the world makes you king for a day
Just go to the mirror and look at yourself
And see what he has to say.

For it isn’t your father, or mother, or wife
Whose judgment upon you must pass
The fellow whose verdict counts most in your life
Is the one staring back in the glass.

He’s the fellow to please—never mind all the rest
For he’s with you, clear to the end
And you’ve passed your most difficult, dangerous test
If the man in the glass is your friend.

You may fool the whole world down the pathway of years
And get pats on the back as you pass
But your final reward will be heartache and tears
If you’ve cheated the man in the glass.

When Mike Roberts, Shag Wright, Boot Thomas, Ralph Hickox and Herschell Hires raised their right hands to take the oath of office, I am confident they were proud to be chosen to serve their community.  Likewise, I am sure they had good intentions of doing the right things to help Wayne County and not hurt it.
After Thursday night’s first meeting of 2017, you have to wonder about those “good intentions.”  As they say, “Perception often becomes reality.”  There may be commissioners who want to help our county; at least that’s what they perceive in their minds.  But the harsh reality—in the minds of thousands of their constituents—is that the majority of the board is more eager to make America’s second-largest waste-management company more happy than the citizens who made them “king for a day.”
Chairman Roberts is right.  There are good men and women working at the Broadhurst Environmental Landfill.  They want to do their jobs and be a part of the community.  That’s easy to understand and appreciate.  What we don’t appreciate or understand is Republic’s corporate disregard for what’s best for Wayne County.
There is no right way for Republic to pimp our community as an environmental prostitute.  It’s wrong to the core.  Our sensitive ecosystem and our health should not be put at risk for Republic’s greed.  The watershed between the Altamaha and Satilla rivers is the worst possible place to build mountains of poisonous coal ash. (See the wetlands map below.)  Likewise, we don’t want to become the Eastern Seaboard’s garbage dump, courtesy of Republic’s proposed rail spur.
We understand how a Wall Street conglomerate, located 2,100 miles away in Phoenix, might be oblivious to that.  But how can Wayne County’s supposed-to-be leaders not see the wrong in that and not have the gumption to enforce a protective ordinance which is already on the books?
Before the February meeting, let’s hope each of our commissioners reflects on his oath of office and take a good look at “The Man in the Glass.”