As I walked toward the tent, she saw me coming.  I nodded, and the funeral director touched my elbow.  In a soft voice, Linda Williamson asked, “You’ll say a few words, won’t you?”  Waiting for the Rev. Tucker Lewis to open the service, I counted 34 people there to pay their respects to one of Wayne County’s most well-known citizens.
For years, I’ve vowed to write a book about Roscoe Emory Dean Jr., and now—without warning—I was expected to summarize his life in “a few words.”  My opening line was, “We all have Roscoe stories.”  The bombastic former state senator gave us plenty to talk about.  Public figures fell into two categories:  Those whom Roscoe had gigged, and those whom he had not gigged, yet.
Roscoe harpooned me more than once.  Roscoe knew just how “to get my goat.” Years later—when we added a herd of goats to the farm—the first four were named Roscoe, Emory, Dean and Junior. 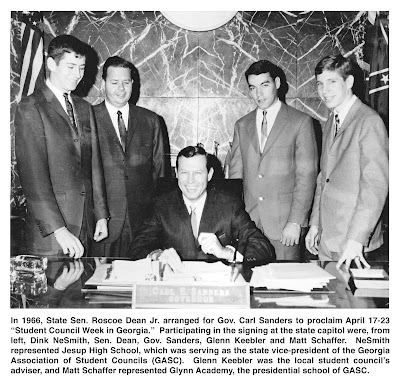 But as time passed, I looked upon Roscoe in a different light: “He was just Roscoe.”  That’s when I realized that holding a grudge is like swallowing poison and waiting for the other person to die.  Harboring hard feelings against Roscoe was harming me, not him.  And if you watched his career get tangled and destroyed in a web of his own ambition, you couldn’t help but feel sorry for him and his family.  Looking back, I believe political opponents set a trap, and Roscoe stepped into it.
I first met Roscoe in 1966, under Atlanta’s Gold Dome.  He was our young state senator, and I was representing Jesup High School as state vice president of the Georgia Association of Student Councils.  He arranged for Gov. Carl Sanders to declare Student Council Week in Georgia.  Adviser Glenn Keebler drove me to Atlanta.  I thought it was a big deal. I didn’t know governors proclaim hundreds of special weeks.  In the state house, I saw the senator’s colleagues snickering and pointing at him—behind his back.  I was too naïve to recognize it as an omen.
In 1971, I was back home and working at the Wayne County Press.  The senator was a huge printing customer, spending money as if it grew on his daddy’s pine trees.  Shop foreman Jim Buie would wrinkle his nose and say, “Here comes Roscoe.”  John Rogers would sniff and say, “Yep.”  Between the senator’s cigar smoke and his daily dousing of Aramis cologne, Roscoe couldn’t sneak in. 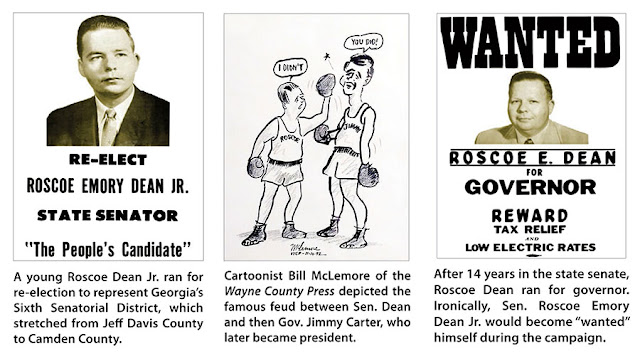 Roscoe “held court” in our back shop, over the hum of Jim and John’s presses.  One day, the crew was ribbing the senator about his drunk-driving charge. Roscoe, in his signature baritone voice, proclaimed the matter was a “sham” and a “farce,” because “Liquor has never touched my lips!”  Jim quipped, “Senator, you must have been sipping it through a straw.”
In 1973, I passed Roscoe on the post office steps.  “Senator,” I said.  “Yesterday, the sixth district got a new citizen. Our brand-new son, Alan, hasn’t gotten a card from you … yet.”  In the next day’s mail, Master William Alan NeSmith got a welcome note—in the distinctive handwriting of the senator’s mother, Lillie—but signed Roscoe Emory Dean Jr.
It was a tossup.  Who wanted Roscoe to be governor most: the state senator or his mother?  Roscoe Sr., a prince of a Southern gentleman, once shook his head and told me: “I believe Lillie would cut off her right arm for ‘Roscie’”.  And she just about did.
A few graveside words on that November morning couldn’t do justice to Roscoe’s colorful 80 years.   After the Republic environmental debacle is over, maybe I’ll have time to write that book about Roscoe Emory Dean Jr.
Unfortunately—after Roscoe lost the family’s Cherry Street building—much of his memorabilia went into a Dumpster.  Sadly—with that—1966’s unrecognized omen had come true.