So this is Republic’s good-neighbor approach?

Since April 6, we’ve waited for Republic to announce its new plan for the Broadhurst Environmental Landfill.  The estimated two or three weeks stretched to 105 days before two documents of legalese popped up in an email. Given the number of attorneys involved, I can appreciate the delay.
What I cannot appreciate is the shift in the waste-management giant’s spirit from “good neighbor” to what appears to be “greedy neighbor.”  Calculators are whirring to determine how many millions of dollars the people of Wayne County will reimburse Republic for keeping more toxic coal ash from being dumped on us.
From the outset of this controversy, I was insulted by Republic’s we-know-what-we-are-doing cockiness.  Despite the public outcry, the Phoenix-based conglomerate showed little concern for our horror of dumping dangerous waste in our precious watershed and porous wetlands.  Facts will prove all landfills will eventually leak.  And we aren’t supposed to sound the alarm? 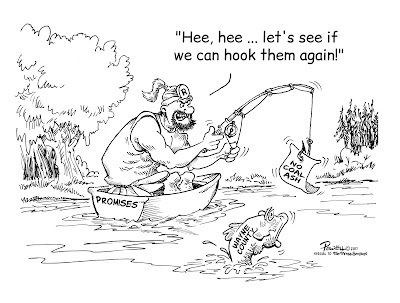 In the early 1990s, a geological report raised a red flag: “Broadhurst was too wet for a landfill.”  Bless the late Eddy Lane’s heart, may he rest in peace. He was the lone commissioner to vote against the county’s pursuing a regional landfill.
Fast-forward 25 years, and look where we are.  We have a modern-day David-and-Goliath battle.  None of us will ever have the mega wealth of the world’s richest man, Bill Gates, who is Republic’s largest shareholder.  However, you don’t have to have billions to own the guts to stand up for the people and the place you love.  I strongly believe: “Where there’s a will, there’s a way.”
We must have the willpower to say to Republic’s latest proposal: “If you aren’t willing to negotiate in more reasonable terms, we will never agree.” If this were a multiple-choice test to describe the proposition introduced on July 20, what answer would you circle?
a.     Spiteful
b.     Punitive
c.     Greedy
d.     Extortion
e.     All of the above
My answer would be “e”—all of the above.
With that said, I need to say this.  Drew Isenhour, Republic’s area president, inherited this public-relations fiasco.  When the stuff hit the fan early last year, he was sent to try to clean up the mess.  He’s been much like the proverbial fellow with a shovel and broom following a circus elephant.  Drew’s strived to improve relations with county officials.  He’s been open to one-on-one meetings with others, too.   Quickly, I realized that he’s as loyal to his company as we are to our hometown.
Drew is a likeable man.  In my heart, I believe he’s tried.  I respect that.  But in my mind, I still go back to the original arrogance of Republic’s executives.  From 2,200 miles away, they saw no harm in turning our community into a national lab-rat experiment to see how much toxic coal ash could be piled in one place.
And now, Republic wants Wayne County to become the trash bin for God-knows-what garbage from Maine to southern tip of Florida.  The new proposal deftly ignores the rail-spur issue.
So where are we now?
We hope meaningful negotiations are forthcoming.  If Wayne County wants to know where we are, we must follow the money to know the truth.  You read in the Bible: “The truth shall set you free.”  The truth can also make you mad.
The math truth will tell us whether Republic is a good neighbor or a greedy neighbor.