Brrrrrrr rump.
Brrrrrrr rump.
Brrrrrrr rump!
When I hear the soundtrack of the movie Jaws, the hairs on my forearms jump to attention.  And ever since that 1975 thriller, I don’t put a toe in salt water without hearing the orchestra’s strings, woodwinds, horns and percussion pieces making that eerie sound.
When the wave of reality from Republic’s latest proposal washed over me, I was 250 miles from the nearest ocean.  Still, I could hear the brrrrrr rump … brrrrrr rump … brrrrrr rump!  That led me on a curiosity field trip.  I wanted to know what instruments were making the hairs dance on my arms.  YouTube took me to the Boston Pops in concert.
I recognized French horns and assorted instruments, but I didn’t know what some were.  That’s when I turned to my boyhood friend, Lee Riggins, a master musician and retired college administrator, for help.  The tingling opening bars are courtesy of contrabassoons, bassoons and double basses.
Thanks, Dr. Riggins.
Lee, too, has been following the environmental saga in his hometown.  So far, I have yet to talk to anyone—other than people on Republic’s payroll—who thinks Wayne County is getting a fair shake in this turn of events.  In fact, a comment referring to Jaws was repeated more than once: “Just when you thought it was safe to go back into the water.” 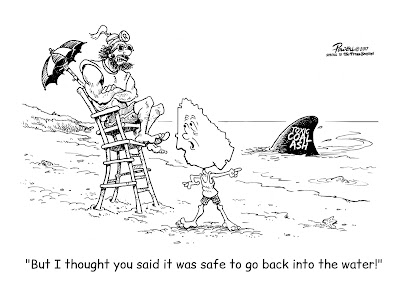 Perhaps you’ve been watching the Discovery Channel’s “Shark Week.”  With our officials about to wade into negotiations with Republic, how’s that for timing?  Sharks are beautiful creatures and serve a purpose in our ecosystem.  However, you don’t have to watch Jaws to know a shark can rip you to pieces.
To Wall Street investors, waste-management conglomerates are “beautiful” and money-making creatures.  Otherwise, why would Bill Gates have billions invested in Republic Services Inc.? Companies such as Republic serve a very useful purpose.  People create enormous piles of garbage and waste, and Republic has capitalized on the opportunity.  That’s the free-enterprise system at work.  But just like sharks, businesses can become dangerously aggressive.
Republic knows our community is staunchly opposed to more toxic waste being dumped in the Broadhurst Environmental Landfill.  It’s a less-than-desirable location for regular garbage, let alone dangerous coal ash.  Wayne County made a mistake 25 years ago by opening the door to an outsider-controlled landfill.
Beyond the slick contracts and flashing of legal teeth, I have been and will continue to be nauseated by the way behemoths prey on poor, rural communities.  These companies know places such as Wayne County are cash-strapped.  We become easy targets and sacrifice zones for dumping what other communities don’t want.  “Easy” money tends to make the fine print easy to overlook.
There’s an old saying: “Fool me once, shame on you.  Fool me twice, shame on me.”  That’s what should be on the minds of those representing us at the negotiation table.  I have a suspicion that Republic’s latest proposal is a ploy to make us say: “Oh, no.  We can’t afford to keep out coal ash.  Let’s keep the old 50-year agreement.”  And then the giant in this David-and-Goliath battle can spin the outcome in its favor by saying: “Well, we gave you a chance, and you turned it down.”
I once heard a fellow say, “If that’s not right, my bleep is a bass fiddle.”
Well, if I’m wrong—brrrrrr rump … brrrrrr rump … brrrrrr rump—my backside is a contrabassoon.