WCHS Homecoming will be special for Class of 1966

After all these years of the same routine, I don’t even have to look in the mirror to shave.  Monday morning, I was thinking rather than looking, as I scraped the razor across my face.  This weekend is homecoming for Wayne County High School, and it’s a redo for the Class of 1966’s 50-year reunion.

“Nooooo, it can’t have been 50 years,” I mumbled to myself.  And then I glanced into the mirror.  Staring back at me was evidence: “Yep, it’s been that long.”  Sure enough, if you see an extra sprinkling of gray-haired fans in Jaycee Stadium Friday night, that’ll be us.  We’re the last class before Odum, Screven and Wayne County Training School consolidated with the Orange Street campus.  Even though the sign on the brick wall said Wayne County High School, we thought of ourselves as graduates of Jesup High.
A half-century can erase some memories, but some just get chiseled deeper.  I’ll never forget:
*The staccato click of Peachy Aspinwall’s high heels on the tile floors or the day she promoted me to an IBM electric typewriter.
*Dissecting frogs in Delores Roberson’s 10th-grade biology class.
*The good humor C.W. Collins used as he tried to teach me algebra.
*The laughter coming from the connecting homerooms of Johnnie Hayes and Kathleen Hires.
*Principal C.E. Bacon’s booming voice on the intercom: “I know who you are.  You might as well turn yourself in.  You will be dealt with accordingly.”
*The stunned silence in the football locker room when we learned our teammate, Cary Bennett, had been killed in an auto accident the night before.
*The hasty auditorium assembly, as we watched—on TV--the drama of the Cuban Missile Crisis.
*The moment and the place where we were on campus when we learned: “JFK has been assassinated.”
*Football camp at Parker’s Paradise in Long County, and the fried-chicken eating contest between Frog Woods and A.T. Hires … and the fistfight that followed. 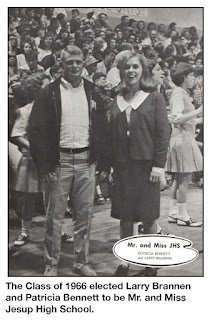 *The growl of Coach Clint Madray, as he chewed Beech Nut tobacco, “I don’t want to see anything but elbows and bleep-holes … go ’til you hear glass!”  Decades later, his words still ring in my ears, as Wayne County stands up to protect its environment from toxic coal-ash dumping.
*Coach Madray’s warning to the football team about reported “mooning” at the Dairy Queen.  With a thunderous whack of the paddle on his palm, he roared, “If I hear any more about redeyes, I’ll give you some redeyes!”
*Ahhhh, the Dairy Queen.  A.B. and Myrtle Morgan blessed our youth with a social Mecca on the corner of Pine and Macon streets.  There’s no way to tally the courtships which started and ended at the DQ.
*The gift Jackie Egan gave her senior English Composition class.  She challenged our teenage minds to think and express ourselves.  We found words in our brains—words we didn’t know were hiding in there.
*And going to a pre-Christmas Yellow Jacket basketball game with my official UGA-acceptance letter poked in my back pocket.  I still stare at that letter and say, “Goodness, I’m glad I don’t have to apply today.”
Most of all, I will never forget the friendships and bonds which have stretched over all this time.  I can’t believe it’s been 50 years.  Well, it hasn’t been.  It’s really 51 years.  Hurricane Matthew disrupted last year’s event.  Thanks to a loyal core of planners, we’re back—full of memories and love for our alma mater.