Ken Hodges is just right for the Court of Appeals

You get one chance to make a good first impression.
Ken Hodges aced that opportunity in 1998.
As South Georgians, we know the feel of sand between our toes.  Ken grew up in Albany.  And just down Highway 91—in the summer—I ran barefoot on my grandmother’s Baker County farm.  We know the rest of the state, too.  We both have degrees from the University of Georgia.  His diploma is from the law school, and that’s what I want to talk about.
My friend is an expert in the courthouse.  After distinguishing himself as both a prosecutor and a litigator, Ken is running for a seat on the Georgia Court of Appeals.  I would never tell you how to vote, but I’m eager to tell you that I’m voting for Ken Hodges.
When I met Ken 20 years ago, he was doing exactly what he campaigned to do.  When he took office at age 30, he was the youngest district attorney in Georgia. Ken had vowed to streamline operations.  Within two years, he wiped out the backlog of eight death-penalty cases.  Politicians are forever making promises, but Ken is more than just a politician.  Ken is a man who keeps his word.
During his 12 years as district attorney, he operated his office under budget every year.  Ken revolutionized the office with special emphasis on programs to better protect the children in his hometown.  Among his initiatives was the establishment of a unit to fight sexual assault.
In his second term, Ken Hodges was named Georgia’s “District Attorney of the Year.”  His peers also elected him president of the state district attorneys’ association.  Ken gained similar respect when he transitioned into private practice.  As president-elect of the State Bar of Georgia, he maintains offices in Albany and Atlanta. 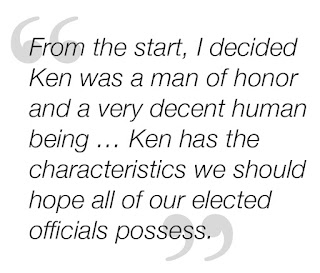 But there’s more to Ken than the lawyer shingles hanging outside his offices.  While I respect his professional credentials, I go back to my first impression.  From the start, I decided Ken was a man of honor and a very decent human being.  Those thoughts have never wavered.  Ken has the characteristics we should hope all of our elected officials possess.
To really appreciate Ken, you need to peek into the window of his family life.  He and his wife of 13 years, Melissa, have two vivacious children—Jack and Margaret.  Every time Ken and I are together—before we talk politics—he shows me pictures and tells stories about the loves of his life.  His children fall into the age lineup of our eight grandchildren, so we always share plenty of anecdotes and laughs.
There’s something else I like about Ken Hodges.  We both drive pickup trucks.  He, too, knows how to loosen his tie and enjoy the beauty of outdoor Georgia.  He hasn’t missed the opportunities of living in the heart of quail country.  But because he is a devoted father, Jack and Margaret’s soccer games and other activities always come first.
Early voting is underway.  In all the gubernatorial-race commotion, you could easily overlook the importance of the Court of Appeals campaign.  The race is nonpartisan, meaning you don’t have to decide to vote Democrat or Republican.
Again, I would never tell you how to vote, but here’s how I’m casting my ballot.  My candidate has the legal knowledge, courtroom experience, personal commitment and integrity that I want on the bench of the Georgia’s Court of Appeals. The decisions of those judges have tremendous impact on our lives.
That’s why I am voting for Ken Hodges.