Rick Bragg cooks up feast of stories and vittles

“Before air conditioning and 900 channels on TV, there was something better for families to do in the evening,” I said.  “They sat on the front porch and swapped stories.”
Rick Bragg was too busy gnawing on a pork rib to comment, so The New York Times best-selling author just nodded.  After two more bites, he wiped his beard and said, “Amen.”  Over the past 25 years, Rick has perfected the art of storytelling, mostly about his poor, rough-and-tumble Alabama family.
His people—rascals and saints—have been the soul of his 10 books and a wagonload of newspaper columns.  A college dropout, Rick now teaches writing at the University of Alabama.  How do you do that?  Winning a Pulitzer Prize opens doors, including Harvard University’s.
During our reunion supper, I recounted how former Grady College of Journalism dean Cully Clark and I tried to lure Rick to the University of Georgia.  “All along,” I said, “I figured Athens was too far from your roots.”  Winking, he took another bite of rib.
Like iron shavings to a magnet, his monthly commentary in Southern Living has drawn a legion of new readers.  Women are asking, “Honey, have you seen my new Southern Living?” Men are eager to read Rick’s back-page column before their ladies become absorbed in the recipes, gardening tips and house do-over ideas. 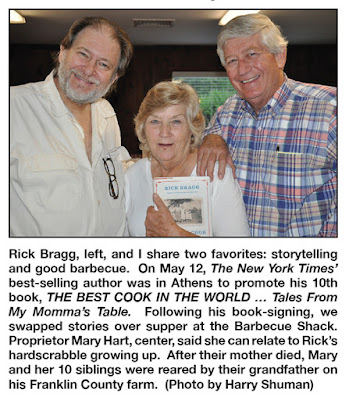 I’ve told Rick before, “My people must have known your people.  The only thing that separated us a few generations back was the Chattahoochee River.  My grandmother said her mule-farming family moved so many times that when a truck backed into the yard, the chickens would lie down and cross their legs to be tied.”
Colorful characters, calloused hands and country cooking connected us in his first book, All Over But The Shoutin’.  I became a fan first, then a friend.  Saturday night, after a book-signing, we talked about our people over plates of slow-cooked pork, stew and slaw at Mary Hart’s Barbecue Shack.  Rick was in Athens promoting his new blockbuster:  THE BEST COOK IN THE WORLD … Tales from My Momma’s Table. As good as Rick writes, his momma cooks better.  Margaret Bragg has never owned a cookbook, but now she’s the star of one.  Her adoring son will make you dab a Kleenex in the corner of your eye—equal parts laugher and soulful reflection.
Here’s how he introduces her:
“Since she was eleven years old, even if all she had to work with was neck bones, peppergrass, or poke salad, she put good food on a plate.  She cooked for dead-broke uncles, hungover brothers, shade-tree mechanics, faith healers, dice shooters, hairdressers, pipe fitters, crop dusters and well diggers. … She cooked for lost souls stumbling home from Aunt Hattie’s beer joint, and for singing cowboys on the AM radio.  … She cooked for people she’d just as soon poisoned, and for the loves of her life.”
There are 485 pages more about the love of Rick’s life, who has cooked in hellishly hot “kitchens where the only ventilation was the banging of a screen door.”  You’ll be treated with a passel of recipes, and I dare you not to chuckle at the way Rick extracted the never-been-on-paper secrets from his modest momma.
For his fans at Avid Books, Rick told how famous chefs had asked whether the recipes had been tried in test kitchens.  He laughed and answered, “I am six-two and 235 pounds. I am a test kitchen.”
As we were licking our spoons of the last taste of Mary’s warm banana pudding, Rick explained his book had two purposes.  He wanted to honor his 81-year-old momma.  The award-winning effort to loft Margaret Bragg onto a pedestal—one more time—has been five years in the making.
With a devilish smile, he added, “And I didn’t want to poison anybody.”