America must keep its eyes on the EPA

You didn’t need a pair of binoculars to see the Scott Pruitt train wreck coming down the tracks. But now that the embattled former director of the Environmental Protection Agency (EPA) is gone, we cannot relax.
From Day One, the former Oklahoma attorney general made it clear he was going to dismantle the agency he despised.  In his old job—much to the delight of his fossil-fuel cronies—he had sued the EPA multiple times.  Our health and the environment were not his top priorities.  Pruitt wanted to adopt an anything-goes approach, especially if it put more money into the pockets of polluters. 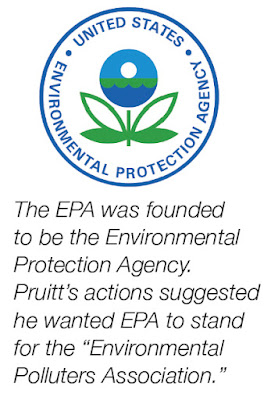 That’s why I traveled to Alexandria, Virginia, to testify at an EPA hearing concerning Pruitt’s proposed guidelines for handling and storing toxic coal ash.  Dozens of people did the same, some from as far away as Puerto Rico and New Mexico.
There were obvious absences from the two-day event.  Why weren’t representatives from the coal industry there to lobby for Pruitt’s plan?  They already had the EPA director’s ear.  His suggested rules were an outline of the industry’s wish list.
Give Pruitt some credit, however.
Albeit a little late, he did the right thing—resign.
There’s no reason to revisit his litany of judgmental lapses.  A short summary could be that his ethical compass simply spun in the wrong direction.  From the moment he arrived in Washington, he didn’t just step in it.  Scott Pruitt tracked “it” all over Capitol Hill.
So why aren’t we celebrating?
Pruitt’s departure is a classic example of the maxim: “Be careful what you pray for … you might get it.”
I am confident millions of nature-loving Americans had prayed for Scott Pruitt’s demise.  One reason might have been: “Nobody can be worse than him.”
Uh-oh.
Think again.
Enter the EPA’s deputy director, Andrew Wheeler.  As acting director, the former coal lobbyist brings his past into the present. In April, the U.S. Senate approved Wheeler in a 53-45 vote.  The split results are far from a mandate of confidence.  Instead, the narrow margin is a tell-tale sign that our senators question the direction in which Wheeler might pull the agency.
Will Wheeler—as his predecessor did—use his influence to steer the EPA away from its original mission?  The EPA was founded to be the Environmental Protection Agency.  Pruitt’s actions suggested he wanted the EPA to stand for the “Environmental Polluters Association.”  If that’s what Wheeler wants, too, we cannot be silent.
To Wheeler’s credit, he doesn’t have a reputation of suing the agency over which he is now providing interim leadership.  He is an expert on the works of Washington’s bureaucracy.  As a savvy operative—inside the political sausage mill—Wheeler knows how to get his way without making a Pruitt-like spectacle.
Now, more than ever, we do need our binoculars.
Let’s keep them focused on the EPA and its acting director.  Andrew Wheeler could be another proverbial fox in the environment’s hen house.  As the old-timers would say, “We don’t want to trade the devil for the witch.”