‘Taking care of business’ with courting on my mind

Elvis believed in “taking care of business.”  It was his motto.  Big Dink took care of business, too.  He made sure his children knew how to work, too.  The summer of 1968, my dad had me in overdrive.  When I wasn’t working as the third helper in the bleach plant of ITT Rayonier, I was helping out at NeSmith-Harrison Funeral Home.
Big D’s to-do list was never short: mowing, raking, washing vehicles, helping on funerals and doing whatever needed doing, including going places to pick up corpses.  That’s why I wasn’t surprised when my dad walked into the back yard and said, “I need you to do something.”
Hosing the soap suds off the light-blue Cadillac hearse, I said, “Yes, sir, what do you need?” 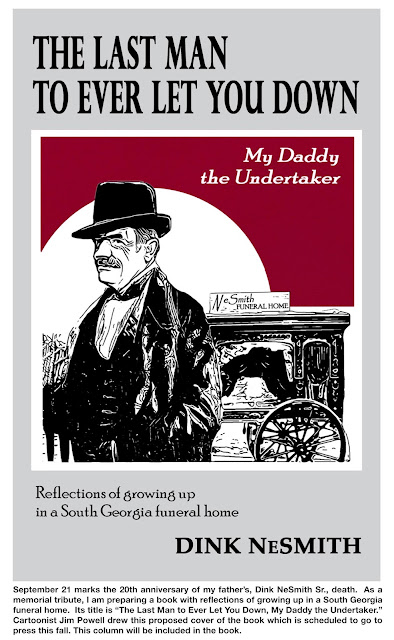 “A man has been killed in a motorcycle accident in Cairo,” he said.  “I need for you to go and pick up the body. You can be back in time for your graveyard shift at the mill.”
I didn’t need to look at my watch.  I could do the math in my head, so I said, “Yes, sir.”
Within 30 minutes, I was on the Waycross Highway heading toward Cairo.  I was probably listening to the Beach Boys, the Beatles or something Motown on Jacksonville’s Big Ape radio station when my mind drifted to a pretty UGA brunette.  We had begun dating several months back.  Pam Shirah lived near Camilla in the farming community of Hopeful.
Maybe it was Sam and Dave belting out “Hold on, I’m coming” that got me to thinking: “Cairo.  Camilla.  Ummm, they can’t be too far apart.” And with that, I decided, “Hold on—I’m coming to Hopeful.”
Once in Cairo, I loaded the young man into the it-had-to-be-light-blue ambulance and pulled the curtains.  This time, I did look at my watch before pointing the 1965 Pontiac toward Mitchell County.  I knew that I had just enough time to veer 30 miles out of the way and surprise Pam Shirah.
And when I turned onto Shirahland Road at Highway 97’s mile-marker nine, dust on the washboard-dirt road boiled up.  But that wasn’t all that boiled up.  Farm hands on both sides of the road saw the funeral home vehicle—with its drawn curtains—and started running toward the barn.
In a chorus of voices, they screamed all the way: “Mr. Lamar, Mr. Lamar—a dead man is coming to your house!”
Whatever was on Mr. Lamar’s to-do list didn’t get done the rest of that day. His helpers had scattered like a covey of quail.
A burly German shepherd met me in the driveway that looped around the house.  All the commotion—panicked helpers and a barking dog—had pulled Pam’s dad out of his workshop.
He was glad to see me, but he said that Pam and her mother had gone to Albany shopping.  They wouldn’t be back any time soon.
Again, I didn’t have to look at my watch.
If I didn’t get rolling soon, I knew Big Dink would be looking at his watch.
He had sent me to “take care of business,” and not to go courting.
Sure, as a 19-year-old, I was disappointed.
But I laughed when I thought: “Well, if Pam had been home, my visit would have brought a whole new meaning to the term ‘double-date.’”