We were strangers.  Our hometowns are on different sides of the globe.  But within minutes, the 8,000-mile expanse shrank to just a few feet away—across a walnut conference table.  Our thoughts were even closer.
John grew up in Karatina, Kenya, in the foothills of Mount Kenya, the second-tallest mountain in Africa.  He’s a banker.  His wife, Esther, is a nurse.  A quarter-century ago, they came to the United States to chase the American Dream.
How did we meet?
As with so many other things, there’s a Jesup connection.  In the 1980s, Curt Spell’s family lived across the street from us.   Today, he’s an ace among Athens real estate agents.  I had something to sell.  That’s how John, Esther and I connected at a real estate closing in early 2016. 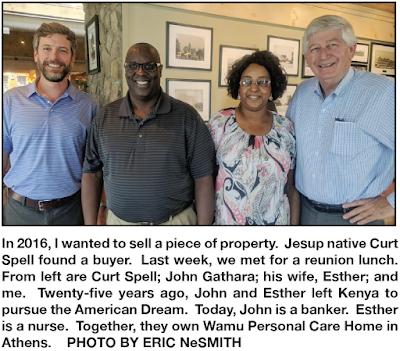 As we were exchanging pleasantries, Curt asked, “How’s it going with the coal-ash situation back home?”  John listened.  And then he began to tell a pollution horror story.  He had witnessed the destruction of the fishing industry along the eastern African coast, especially in neighboring Somalia.
Horrible toxic and hazardous wastes had been dumped into the Indian Ocean.  Fish, the country’s cash crop, were poisoned and died.  Besides the environmental harm, Somalia’s economic structure was devastated, too.  A culture of crime and piracy evolved to fill the void.
John explained how environmental degradation was a constant threat to the people of Africa.  The lack of an environmental consciousness turned once-forest-filled areas into deserts.  In a recent visit, he introduced me to the history of Wangari Maathai, who started as a one-woman crusade to reforest Africa.  The government’s tree experts laughed at her when she challenged village women to join her Green Belt Movement.
Research Wangari Maathai.   Since 1977, the women have done what the naysayers said was impossible.  An estimated 30 million new trees are growing in Africa.  Along the way, Maathai was awarded the Nobel Peace Prize.  But the most important “prize” was the shifting of attitudes toward more responsible stewardship of natural resources.
Last Friday, I invited John, Esther, Curt and our son Eric to lunch.  John was eager for an update on Wayne County’s toxic coal-ash issue.  I was pleased to report that no additional coal ash has been dumped into the Broadhurst Environmental Landfill.  But best of all, there’s a productive dialogue going on between Republic and the community.  As the saying goes: “Where’s there’s a will, there’s a way.”
On the following day, Saturday, I met Dale.  He’s a jeweler who goes to Africa in search of diamonds.  Dale, too, had been following our coal-ash story.  He explained that he isn’t a “conservationist,” but he is appalled at some of the things going on with the environment.
On one of his buying trips, he was staying in a “fancy” hotel on the coast of West Africa.  Poverty was obvious.  Natives came to the volcanic reefs along the shoreline to catch fish that got trapped when the tide receded.   Fish are a mainstay in local diets.  Grimacing, Dale said the hotel—100 yards down the beach—was dumping its raw sewage into the ocean.
That took me back to what John said the day before, “When you dump things into the ocean, you don’t know where the waves will take it.”  I say the same thing about our wetlands, aquifers and streams which lead to the Atlantic.
Wayne County is not alone.
Environmental degradation is a global challenge.
That’s why even strangers share our concerns.