Even in crisis, Hurricane Michael brings out best in people

As soon as he could steady a plow, Lamar Shirah was guiding a mule down the furrows in his daddy’s fields.  As a World War II soldier, he guided a general’s Jeep through the battlefields in the South Pacific theater.  Soon to celebrate his 93rd birthday, he is still tall and lean.  Macular degeneration has taken most of his eyesight, but his big hands still have the strength of vise-grip pliers.
If anything is stronger than those once-calloused hands, it would be Lamar’s faith, along with his love of his family and the land, some of which has been theirs for more than a century.  But he didn’t need his eyesight to know the 150-mph winds were ripping apart Southwest Georgia.  He could hear barns crashing and old-growth trees being yanked from their roots or being snapped like twigs. He knew crops were being destroyed, but he prayed lives would be spared.
From 250 miles away, all we could do was pray, too.  Communication was nearly impossible.  Toppling trees had blocked roads while snatching down power and phone lines.  Cell coverage was spotty at best.  That corner of Georgia, “God’s Country” to homefolks, has seen its share of tornadoes, but a hurricane—with Michael’s record-setting force—had never penetrated that far inland. 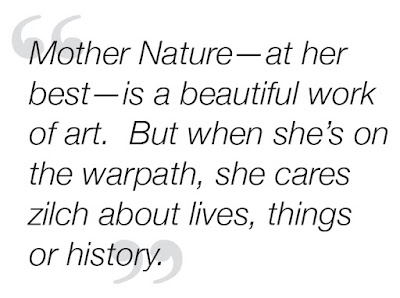 By the grace of God, Lamar and his family were safe. He and his 91-year-old wife, Willene, had ridden out Hurricane Michael’s wrath. Their storm shelter was the two-story house that he built with his handsaw and hammer, in between crops of cotton, corn and peanuts.  In 1949, the original structure was ready for the arrival of their first child, Pam, my wife.  The frame house was remodeled multiple times to make room for her two brothers, Ray and Tim, and a sister, Krista.
While destruction surrounded the small crossroads community of Hopeful, nothing compares to Mexico Beach, Panama City and the other beachfront playgrounds enjoyed by farmers who had just seen their crops blown away.  Mother Nature—at her best—is a beautiful work of art.  But when she’s on the warpath, she cares zilch about lives, things or history.
You and I know people who were unfortunate to be in the path of Michael’s anger.  One friend emailed from what used to be their house in Mexico Beach, Florida.  Her dishes were the only thing left, but she wrote, “God is bigger than this storm. My eyes are to the heavens.”
That kind of unsinkable spirit illuminates the soul of we-will-beat-this survivors.
A friend—who’s a farmer and a businessman in Mitchell County—was without power for 12 days, but he knew his family would endure.   They’ve walked on the white-hot coals of natural disaster before.  So how did they handle this crisis?  Despite severe financial setbacks, they counted their blessings and used their energy to deliver generators and water to those not so lucky.
Over on Shirahland Road, Pam’s family knew they will get through this, too.  Her brother, Tim, put his farming and business enterprises on hold to emerge as a field general, directing and doing whatever has to be done on the road to recovery.  He’s never plowed a mule, but he’s tall and strong, filling the shoes his father wore for so many years.  His spirit radiates: “We are survivors.”
Lamar doesn’t need perfect eyesight to see that, either.