Crisco may be cold, Dairy Ranch’s but memories are hot

With their mother out of town, I was Mr. Mom.  Getting three ready for school wasn’t a challenge.  Alan, Emily and Eric knew the drill to hustle out the back door.  But when they came home in the afternoon, the big question was: “What’s for supper?”
On the second night, I said, “Load up in the car.” All the way out the Savannah highway, I was peppered with “Where are we going?”
“You’ll see,” I answered.
When I pulled off the road, the trio saw the “Eat Now” sign. They chirped, again, “What’s for supper?”
I repeated: “You’ll see.” 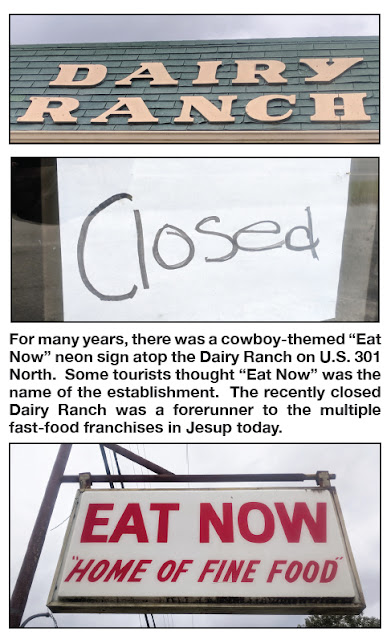 Eric must have been about 3.  His cheeseburger sat untouched.  He was mesmerized by the wax-paper bag of battered and crunchy French fries.  After dipping about three Dairy Ranch fries into a glob of ketchup and munching, he licked his lips.  With a puzzled look, our youngest asked, “Daaaaddy,” why haven’t we ever done this before?”
That was about 35 years ago.
Before I-95 emerged, U.S. 301 was a major north-south travelers’ artery. So when Homer Johnson opened the Dairy Ranch in 1952, it was an immediate hit.   Over the years, the establishment has had four owners.  In the late 1970s, Carlton Roberts—after graduating from the University of Georgia—joined our company for a stint.  His parents were proprietors of the Dairy Ranch then.
In so many words, Carlton said that if he had all the Crisco that had been used at the Dairy Ranch, he could float every boat in Wayne County.  We Southerners do like it fried.
Several generations of teenagers grew up under the Dairy Ranch’s neon glow.  The Dairy Queen was a phenomenon, too.  Cruising around the DQ on Friday and Saturday nights was a must.  But the “Eat Now” had a jukebox inside.  You could listen to Elvis and chomp on a foot-long hot dog and a bag of those irresistible French fries.
Box meals were big at the Dairy Ranch.  Back in the day, a sign in the window even advertised a rabbit box.  But the all-time favorite was the chicken box—crunchy chicken and crunchy fries.  The late Avron Moore—during his life—ate so many chicken boxes that he was nicknamed Chicken Box.  Jesup City Manager Mike Deal said, “I never heard him called anything but Chicken Box.”
In the 1980s, I got to know Eddy Lane—owner of the Dairy Ranch—when he was a county commissioner.  And after his death, members of his family continued operation until closing last summer.
Saturday, I pulled into the Dairy Ranch parking lot, hoping to step back into the 1960s.  I thought a bag of those French fries would be the ticket to Memory Lane.  And then the “closed” sign on the drive-in window reminded me that the Dairy Ranch really is a thing of the past.
On July 1, owner Brenda Lane decided to retire.  She worked there almost 40 years. Twenty-four years ago, she purchased the restaurant from her father-in-law.  “Wayne County has been good to me,” she said.  “I am very grateful.”
Today, the Crisco may be cold.  But decades of Dairy Ranch stories are still hot.
Right now, I can see Eric’s puzzled look and hear his words: “Daaaaddy, why haven’t we ever done this before?”
Long live Southern-fried memories of the Dairy Ranch.