When your birthday is on Thanksgiving Day, you know plenty about pumpkins. Just ask Samuel Fenn NeSmith, who is the fifth grandchild in our lineup of eight.  For his first Halloween, his mom hollowed out a big pumpkin and plopped Fenn in it, with his 11-month-old legs poking out of the holes.  His flaming orange locks matched the color of the pumpkin.
Fenn doesn’t remember that photo session, but he does recall his first attempt to hollow out a pumpkin.  It was last year.  His parents, Alan and Heather, cut off the top and urged him to reach in and grab a glob of innards.  The 6-year-old wasn’t so sure about that, but he wrinkled his nose and plunged his right hand in. 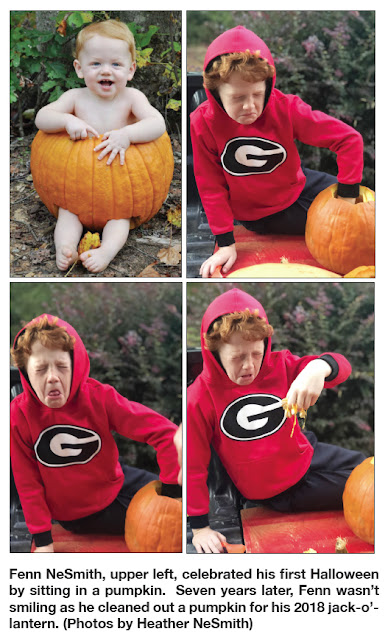 Yuck!
That was the end of that.
And then comes Halloween 2018.  That big round orange thing was sitting on the tailgate of his dad’s truck.  Alan sliced a circular hole to expose the insides. With her iPhone camera aimed, Heather said, “Dig in, Fenn.”  What a difference a year makes.  The 7-year-old—ever the comic—didn’t disappoint his audience with facial expressions.
Sunday night, I called Fenn.
He wasn’t sure he’d ever like cleaning out pumpkins, but he reminded me that he’d soon be 8.  When I asked him whether he liked pumpkin pie, he said, “Grandpa, I dunno.  But my brother, William, does.”
Since William and Fenn both have birthdays—10 and 8—the week of Thanksgiving, I suggested they have pumpkin pies, with candles, instead of cakes.
He giggled and said, “Yes, sir.”
And then he reminded me that their cousin, Henry, would be having a 10th birthday that week, too.  “Great, Fenn,” I said.  “We need to make three pumpkin pies.  I will need some extra hands.  Will you help me scoop out the pumpkins?
“I dunno … uhhhh … yes, sir.”
From his nasal-tone answer, I could tell Fenn’s freckled nose was wrinkled.