Jesup and Len Hauss: Two ways to kick off a conversation

No matter where I am, one word—“Jesup”—can usually kick off a conversation.  All I have to do is mention my hometown.  And if it’s in a sports crowd, two more words—“Len Hauss”—roll the calendar back as far as 1959.
That’s when Len rushed for 1,500 yards and 15 touchdowns en route to the Jesup Yellow Jackets’ winning a Class AA state championship.  The All-State fullback’s next stop was in Athens.
Ten years ago, I met Georgia Bulldog legend Charley Trippi.  I used three words –“Jesup” and “Len Hauss”—to launch the conversation, which led to our friendship.  Charley, MVP of the 1942 Rose Bowl, remembers Len’s early UGA days.  He says, “I told Coach Wally Butts that we should switch Lenny to center.” And the rest is NFL history.
Four games into his rookie season, Len was named starting center for the Washington Redskins.  For 192 consecutive games, he snapped the pigskin for the ’Skins, keeping Jesup fans glued to the TV on Sunday afternoon.   Before retiring in 1978, Len had played in a Super Bowl, started in five Pro Bowl games, was named All-Pro twice, and served as president of the NFL Players Association. 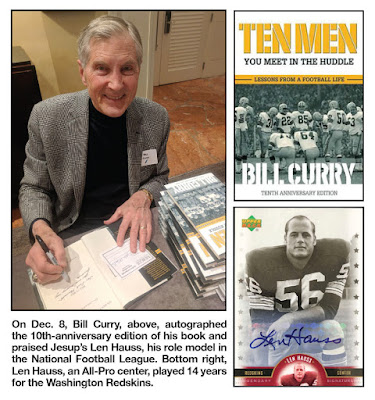 Last Saturday, I was in Atlanta for the Twenty-Ninth Annual Authors Luncheon of Mercer University Press.  Among the authors was Bill Curry.  When I mentioned Jesup, he smiled and said, “Len Hauss.”  For 10 minutes—in between signing books—he heaped praise on Len.
“I’ve admired Len Hauss,” Bill said, “since we played against each other in the high school all-star game.”  Bill was a College Park High School standout and later starred at Georgia Tech, before being drafted by the Green Bay Packers.  That was 1964, the same year Washington signed Len.  “As an NFL center, I wanted to be as good as Len Hauss.  And when I was president of the NFL Players Association, Len was right by my side.”
Bill said his daddy was a Bulldog, but he joked, “I had to go to Tech because it was closer to Agnes Scott.”  His high-school sweetheart, Carolyn Newton, was attending college in Atlanta, not far from Georgia Tech.  Today, Carolyn and Bill are celebrating 55 years of marriage.
During his NFL career, Bill earned two Super Bowl rings—one for Green Bay and another for the Baltimore Colts.  He snapped the ball to two Hall of Fame quarterbacks, Bart Starr and Johnny Unitas.   After 10 years in the pros, he was a collegiate head coach four times: Georgia Tech, Alabama, Kentucky and Georgia State.  Len and Bill are both members of the Georgia Sports Hall of Fame.
This year, Bill released—through Mercer University Press—a 10th-anniversary edition of his TEN MEN YOU MEET IN THE HUDDLE, Lessons from a Football Life.  On that roster are his high-school coach Bill Badgett, Bobby Dodd, Vince Lombardi, Bart Starr, Willie Davis, Ray Nitschke, Don Shula, Johnny Unitas, Bubba Smith and George Plimpton.  If you are an old-school football fan, these names will resonate and take you back a half-century.  But trust me, the stories behind each are just as relevant today.
Before I left Bill’s autographing station, he penned a note to his NFL role model: “Len, you were the best OC!  Merry Christmas!!”  Yes, indeed, Len was an All-Pro offensive center.  But more than that, Len is an ambassador for his hometown.  He helped to introduce Jesup to the millions.  In pre-game-TV spotlights, he’d say, “I’m Len Hauss from Jesup, Georgia, and I catch more redbreasts than anyone in the NFL.”  He’s a pro in fishing circles, too.
Thank you, Len.
You are one of the reasons I am proud Jesup is my hometown.