Keep lumps of coal (ash) out of their stockings

Once upon a Christmastime, visions of sugar plums danced in our heads.  We knew that, if we were more naughty than nice, Santa was going to forget the “sugar plums.”  Instead, he’d fill our stockings with switches and lumps of coal.
I grew up in the OK-to-switch era.  My grandmother’s switch of choice was from her backyard plum tree.  There was nothing “sugar” about those limber plum limbs.  Santa could keep the switches.
Ditto for that the lumps-of-coal thing. I was all about the Sears’ Wish Book.  In the hefty catalog were bicycles, BB guns and roller skates.  In fact, I never really thought that much about coal until I read John Grisham’s Gray Mountain.
I knew coal mining was a major industry where the work was dirty and often hazardous.  I also knew that coal provided cheap generation of electricity.  But—for the most part—I had not paid much attention to the pollution issues.
In 2014, by the time I had turned the last page, Grisham had rattled me awake to the ugly downside of coal burning—especially the toxic substance left behind.  Coal ash can destroy people’s health and poison the environment.
Yes, I know.
Grisham is a novelist, but the foundation of Gray Mountain is based on real-life facts.  And that’s how I learned of the dangers of coal ash.  So when I heard Wayne County was destined to become a major coal-ash dump, I knew the community had to rally to defend our natural resources and our lives.  That was 35 months ago.
Thank goodness you made your voices heard.  And we are grateful Republic Services Inc. listened.  I have faith there will be an amicable resolution to the issue in the new year.  While the devil is always in the details, we cannot lose our focus on what must be done.
For years, coal-burning industries operated—more or less—beneath the radar of general public conversation.  Not anymore.  America is talking about coal ash.  A day rarely goes by that someone doesn’t send me a news article on the subject.
Last week I received a report from Earthjustice and the Environmental Integrity Project entitled “Georgia at a Crossroads.”  It is time to decide whether we are going to strengthen our coal-ash laws.  According to the report, “11 of Georgia’s 12 coal-fired power plants have contaminated groundwater with one or more toxic pollutants.”  All but one of these plants are Georgia Power-owned. 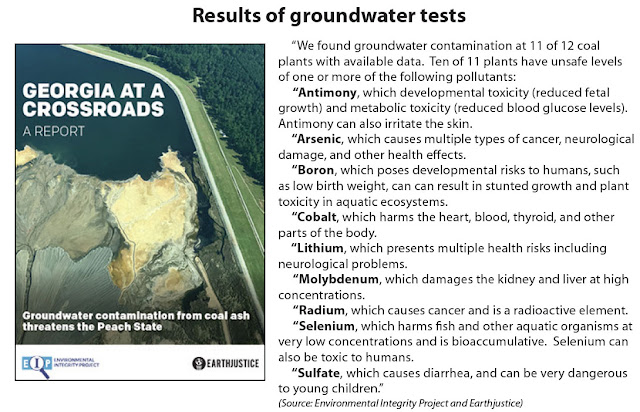 Almost simultaneously, Georgia Power released an update on the progress of shutting down all of its 29 coal-ash ponds.  Aaron Mitchell, the company’s general manager of environmental affairs, was quoted: “The intent for every single closure—whether excavation or closing in place with advanced engineering measures—is to make sure groundwater is protected during and throughout the life of that closure.”
So how long is that?
Mitchell said: “Once the ponds are closed, we will continue to monitor groundwater around them to ensure the quality for at least 30 years.”  I am glad Georgia Power is taking proactive measures, but many of us will be gone in 30 years.  What about our grandchildren?  How about our great-grandchildren’s grandchildren?
Do they deserve pollution from lumps of coal (ash)—Christmas after Christmas—for generation after generation?
If our generation allows that to happen, shame on us.
We would deserve to be switched.