(Note: This is an excerpt from the upcoming book, The Last Man to Let You Down, My Daddy the Undertaker, which goes to press this month. It is expected to be available by mid-summer.)
The fact that there wasn’t a funeral did not mean you had time to goof off. Big Dink believed: “If you had time to lean, you had time to clean.”  When you worked for him, you worked.
“The Last Man to Let You Down, My Daddy the Undertaker” didn’t have an idling gear in his drive train. He expected everything in his operation to be spit-shined—your shoes, the hearse and the heart-pine floors in the parlor.
When you left a church after a funeral, he wanted the place in better shape than before the service. If flower petals were on the floor, you got them up. If a vacuum cleaner wasn’t handy, he said, “Pick ’em up … just like a chicken eating corn.” And that’s what we did. We “pecked” until the carpet or tile was spotless. 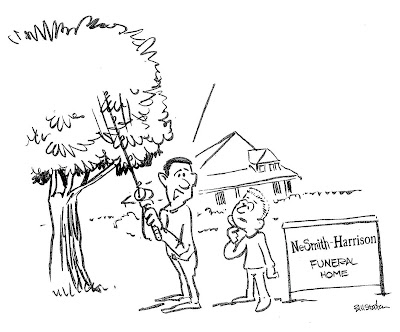 My dad had a first-thing-in-the-morning rule: The front porch and sidewalk were swept before the doors were opened. He wanted the heart-pine floors gleaming. Many times, I saw Guy Fussell and James Gordon—wearing starched shirts and ties—on their knees rubbing in Johnson’s Paste Wax. And when I got to the Army, a sergeant didn’t have to teach me to spit-shine shoes or the latrine.
Big Dink called the vehicles rolling stock. Dust didn’t linger on the hearses or ambulances. We washed them before they got dirty. He had the same philosophy about the grass. You didn’t wait until the grass looked as though it needed cutting. Heaven forbid if leaves cluttered the lawn.
You never knew when 427-3721 would ring with a death call or there was a wreck on U.S. 301 South. That’s why all this yard work was done in dress clothes. I’ll never forget an autumn morning in 1962, when I walked onto the front porch of 111 West Orange Street.
Guy Fussell had hung his suit coat on a rocking chair, and he had tucked his tie into his white shirt. For a few moments, I stood there and watched him working up a sweat.
When I asked what he was doing, he didn’t answer right away. He was too busy waving a cane pole and banging it against the limbs of the dogwood and redbud trees on the front lawn.
After about a dozen more whacks, he said, “Your … whack … whack … daddy … whack … makes me … whack … whack … rake these yards … whack … and  I’m … whack … sick and tired … whack … of doing this … whack … every morning!”
With two more whacks, the last leaf fell. Laying down the fishing pole, he picked up the rake. Turning to me, he said, “I mean it.”  Then he paused to wipe his forehead. “This is the last %@#$ time I am going to rake these leaves this year!”