Vrrrrrooooom! This 13-year-old is off to the races

First impressions stick.
I remember the first time he stepped out of his daddy’s pickup truck. The pre-teen stuck out his hand and said, “I’m Tanner.” As he gripped my hand, he looked me in the eyes. He punctuated our first conversation with “Yes, sir” and “No, sir.”
That was a few years ago. Now he’s taller and 13. His good manners have only improved. Good parenting is hard to hide, but I was slow to learn about his hobby. I’ll tell you about that in a minute.
What I knew was that Tanner comes from a farming heritage. Between our farm and the county seat, both sides of the roads are sprinkled with relatives of his. These folks are serious about the soil and the outdoors. When they host their annual opening-day dove shoot and barbecue, you better get there early or you’ll stand at the end of a long line.
It’s only natural that Tanner, as an eighth-grader, is active in the Future Farmers of America and 4-H. He’s avid about hunting and fishing. He likes to shoot hoops in the backyard, and he once played Little League baseball. But today, Tanner’s recreational passion is “slinging dirt.” 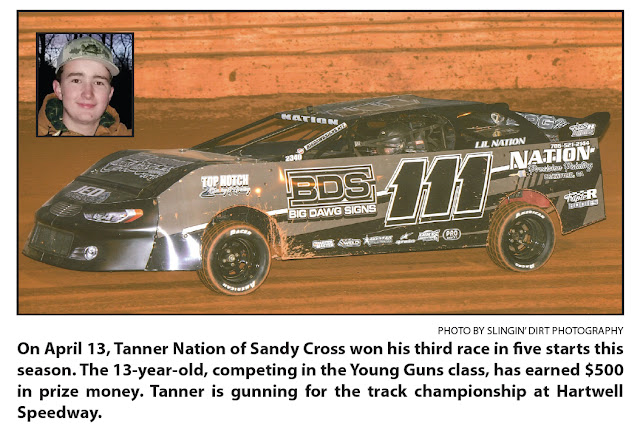 That’s right.
In two years, Tanner Nation will be old enough to get his learner’s permit so that he can drive with an adult in the car. But on Saturday nights this spring, the Oglethorpe County Middle schooler is driving—solo—70 mph on Hartwell Speedway’s red-clay oval.
So far in 2019, Tanner has claimed the checkered flag in three of his five races. The last two victories were nose-to-nose finishes with Tanner’s Number 111 winning by inches. Last Saturday night’s draw put Tanner at the back of the pack, but he muscled his way to be first at the finish line. His daddy, Adam, told me, “Man, I thought I was going to have a heart attack.”
And then I learned more.
None of Tanner’s pit crew can drive—legally by themselves—on the streets either. Three are 15, and the youngest is his 8-year-old-sister, Charlie. She’s the family jester who ribs her big brother, “You better do right, or I’ll be driving that car.”
These youngsters know how to turn wrenches. They work on the engine. And when a new body for the Ford Mustang arrived, the crew bolted it on the chassis. On Friday nights—when others their ages are hanging out with friends or playing video games—Tanner’s team is hanging out in his garage, getting ready for the next race.
Since we have grandsons near Tanner’s age, I tried to imagine any of them behind the wheel and roaring around a dirt track. Well, I couldn’t. They might have ink in their veins, but not motor oil, as Tanner does.
He’s a fourth-generation dirt-track racer, going back to his great-great-uncle, his granddaddy and his daddy. The Nation family is famous for slinging Northeast Georgia red clay and stacking trophies on the shelf. Even though he’s just 13, Tanner is looking way down the road. He hopes he can inspire a fifth generation to zoom around the track one day.
I asked, “Tanner, do you ever get nervous?”
“No, sir,” he said. And then he corrected himself, “Yes, sir. I do get nervous when I see the white flag.” That’s the traditional warning that you’ve got one last lap to win. Nervous or not, that’s all Tanner has needed.
Yes, sir.
First impressions do stick.
I knew Tanner was a winner from the start.