Work.
Hard work on the farm.
Lloyd Carter, 97, said that was all he knew growing up in rural Northeast Georgia.  But when the Japanese bombed Pearl Harbor on Dec.7, 1941, Carter knew that he had to put down his plow and fight for America.

Before his 20th birthday on May 10, he was training at the Army’s Camp Wheeler in Macon.  By October, the young soldier was in Beaminister, England, preparing for the amphibious assault of North Africa.  After fighting in Morocco and Tunisia, he was among the Americans—led by Gen. Omar Bradley and Gen. George Patton—who triumphantly invaded Sicily.
For a farm boy with a seventh-grade education, Lloyd Carter was getting a crash course in world geography while toting a bazooka on his shoulder.
From below the toe of Italy’s boot, Private First Class Carter and the 16th Infantry went back to England for seven months of intense combat preparation, including 30-mile marches.  “We trained so much you didn’t have to think what to do,” he said. “Everything became automatic.”
On June 6, 1944, as Carter jumped from the Higgins Boat into armpit-deep surf, he knew what to do.  He charged forward, blasting German strongholds on the cliff above Omaha Beach.
Shaking his head, the humble hero from Hull said, “You didn’t walk. You ran. You couldn’t go anywhere without stepping on a body.”  Casualties covered the beach, and bodies bobbed in the red-stained salt water.  Of the 156,000 who stormed Normandy’s beaches, an estimated 4,415 lost their lives.
Pfc. Carter almost came home in a body bag, too, but he said, “The Lord looked out after me.”  He remembers the strafing gunfire all around him while he was burrowed into the gravel-like sand. He watched as a Nazi bullet severed the ear of the soldier next to him. Carter believes what happened next saved his life. He rolled over to reach for more ammo.  Instead of the bullet piercing his head or torso, the hot Nazi lead shattered both bones in his right forearm.
For hours, Carter lay—with his teeth chattering—among the dead and wounded, as the 4th Division pushed Adolf Hitler’s troops back.  That allowed medics, in a boat, to get to Carter and others.  Once aboard the ship, which was converted into a war-zone hospital, the farmer-turned-soldier’s teeth stopped rattling.  He remembers shuddering at all the dead, draped in mattress covers, lined in rows on the deck.
“The first thing they did,” Carter said, “was to cut off all my clothes to make sure I wasn’t wounded anywhere else.”  Dialing up humor, he said, “There I was nekkid as a jaybird, but in my left hand I was holding my pocketknife, my wallet and a little New Testament.”  He laughed and said, “I was willing to walk off that ship—nekkid as a jaybird—when we got to England, but they gave me an old pair of sailor pants.”
With that, he rose from his chair and said, “Just a minute.”
When he returned, he was holding three things.  In two small black boxes were his Purple Heart, Silver Star and Presidential Citation, signifying his bravery and valor.  The third item was the same New Testament that he toted onto Omaha Beach with his bazooka.
“My favorite Bible verse,” he said, “has always been the 23rd Psalm.”  Pfc. Lloyd Davis Carter had not just walked through the “valley of the shadow of death.”  He had run through it 75 years ago on June 6, 1944. 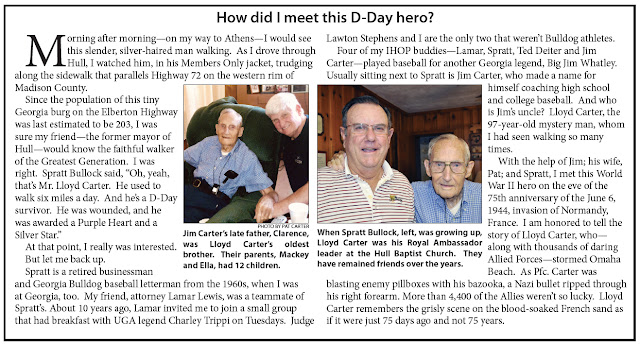