SAN MIGUEL, COSTA RICA—The smooth hum of tires on asphalt gave way to the deafening rattle of a 24-passenger bus on its uphill climb. Headlights danced, as we shimmied, into the ebony beyond. While we couldn’t see where we were going, we could feel every inch of the narrow road that was littered with rocks the size of lemons, oranges and grapefruits.
Sitting shotgun, I listened to the chatter of our eight grandchildren. The crescendo of their excitement started in the Atlanta airport and notched higher with each bump, as we drew nearer and nearer to La Carolina Lodge (www.LaCarolinaLodge.com), which hugs the lush bluff of a whitewater river in Costa Rica’s rainforest. 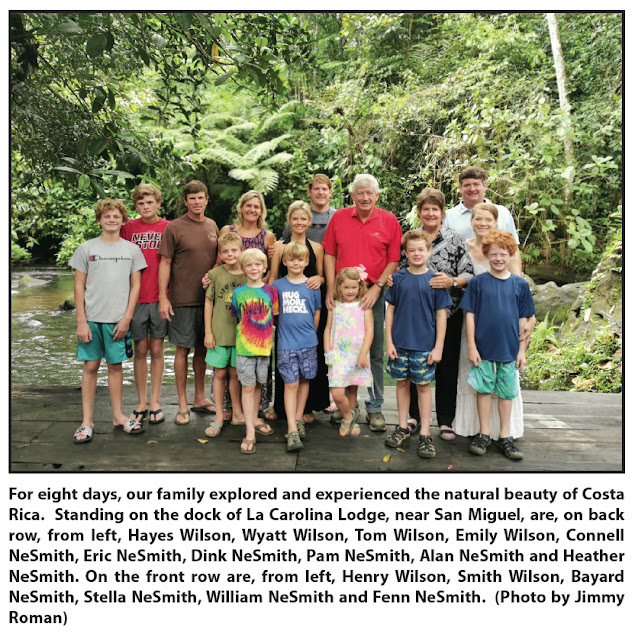 What our friends, Bill and Karien Harwell from Sullivan’s Island, South Carolina, have created mirrors my vision of paradise. Imagine a kissing cousin of the Garden of Eden, rustic cabins with architecture akin to Swiss Family Robinson and a soundtrack straight out of a Tarzan movie. That was the ambience greeting us as we crunched up the candle-lit path of tiny red volcano rock to the tin-roofed lodge.
What were we doing in Costa Rica?
Last December, I blew out 70 candles. In June, Pam did the same. And on Aug. 23, we’ll commemorate our 50th wedding anniversary. Our family thought we should take a trip. I listened and announced my first choice: Costa Rica.
I wanted Wyatt, Hayes, William, Henry, Fenn, Bayard, Smith and Stella to fall in love with Costa Rica, just as I had done in 1999. The lodge’s food is pure farm-to-table. By the end of their first breakfast—cooked by Ernestina and her helpers on a wood stove—and watching toucans peck bananas, just a few feet away, I knew nothing but fun and laughter were ahead for the next seven days.
Fifteen years ago, we “adopted” Jimmy Roman. He’s more than a driver and a much-loved amigo. He is the ultimate host and Google of all things Costa Rica. And by the end of the eight-day adventure, everyone wanted to bring Jimmy home to Georgia.
Each family got to make its own itinerary. Some of the choices were fishing, swimming, hiking, zip lining, whitewater rafting, horseback riding, bird-watching, kayaking, snorkeling, soaking in a wood-fired hot tub, daydreaming in a leather rocker, lounging—with a book—in a hammock, and playing raucous games of Uno or Go Fish with cousins by the outdoor fireplace. And there was always hot coffee, almost stout enough to walk over by itself and pour you another cup.

You can always count on the rain forest to do what made it famous. Afternoon naps, under a raindrop-pelted tin roof, are a signature event at La Carolina. But you don’t want to snooze long. Alejandro and Juan want you to saddle up and go exploring. From hilltops, you can see Lake Nicaragua on the horizon and three volcanoes—Rincón de la Vieja, Miravalles and Tenorio. And when Alejandro bangs his machete on a tree, howler monkeys sound off.
By Day Three, when Jimmy Roman cranked the diesel bus, tears trickled down the faces of the little ones. They didn’t want to leave their new favorite playground. The two oldest asked, “Grandpa, do you think we could work here next summer?”
Down the bumpy road we bounced, waving to Manuel, leaning in the front door of his cantina. Another adventure awaited us on the Pacific side of Costa Rica, often voted one of the happiest places on the planet. The expression “pura vida” abounds. Among the translations is “life is good.”
The seaside village of Samara was new to us, but it did not disappoint. With hills running down into the turquoise surf, there were three separate beaches to experience. Each had a different personality, and one treated us with a banquet of grilled yellowfin tuna and mahi mahi.
As Kenny Chesney sings, “You had me from hello,” Costa Rica—20 years ago—had me from “¡Hola!” By the time we touched down at Hartsfield-Jackson International Airport on July 2, that love affair was 16-deep inside our family. Etching memories of a lifetime—in a happy place—and returning safely were our goals.
That’s what we did. Among the eight grandchildren, we came home with everything but four flip-flops and one passport. A nameless grandson’s passport is somewhere on the Delta jet. The 12-year-old has a future in sales. He talked his way back into America.
And we’ll be talking about this trip for a long, long time.
Pura vida, y’all!