Northerners and neighbors are dumping on us

Every sunrise is a wake-up invitation to learn. One hundred and sixty-two sunrises ago, I had never heard of the digital magazine Ozy.  And then a phone call from Nick Fouriezos took me to school on this international media company.
But why me?
Nick was gearing up for a months-long investigation of how the South, aka, The Bible Belt, is becoming America’s trash can.  From Yankee garbage to what Northerners flush down their toilets, the region below the Mason-Dixon Line is getting dumped on—big time.
Nick had researched our toxic coal-ash battle.  He wanted to know more.
He asked to come see me.  Over breakfast, we swapped information.  We talked about Wayne County’s pushback on more coal ash, and we discussed Bank County’s situation. He was not surprised that North Carolina’s Duke Energy is dumping millions of tons of toxic coal ash in Northeast Georgia.
“How did that happen?” he asked. 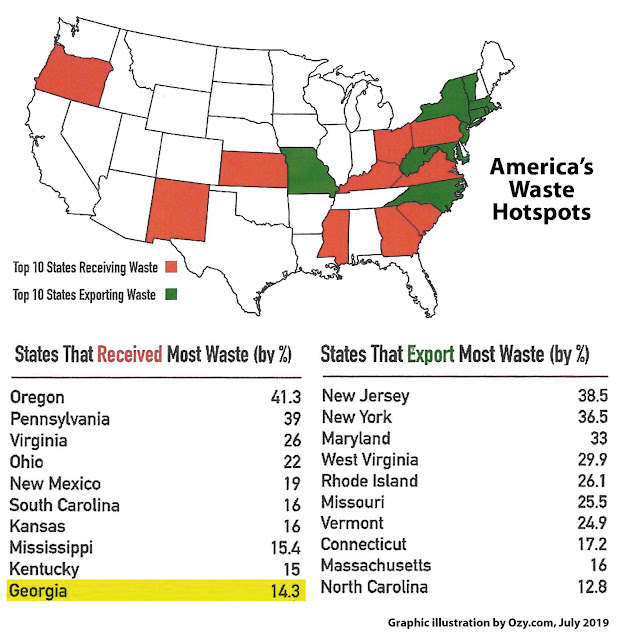 I explained Georgia lawmakers, in an effort to minimize Georgia Power’s toxic coal-ash disposal costs, had—consequently—rolled out the welcome mat to other states.  And for a mere $1 per ton, Duke and others are piling it on the Peach State.
I encourage you to go online to read Ozy’s “Love Thy Neighbor: The Bible Belt Is Becoming A Dumping Ground.”  The facts in Nick’s in-depth article will make you gag, but not as much as the Poop Train that stunk up a small Alabama town for months.  That’s right: Our neighbors to the North—New York City and New Jersey—really “dumped” on rural Alabama.
If that doesn’t get you scrambling for a clothespin for your nose, read this sentence from the article: “A portion of the Big Apple’s 2.4 million pounds of daily sewage is dropped off in Georgia, too.”
Whattttttttt?
Where?
I want to know.
Don’t you?
Georgia is too beautiful to become a cesspool for other states.  As Alabama’s David Brasfield was quoted in Ozy, “They’ve got land up there.  They can handle their stuff.  And we’ll handle ours.”
Nick also reported the findings of the Environmental Council of the States.  Our neighbor, Alabama, had the “least-funded state environmental agency per capita in 2013, 2014 and 2015 per person.”  Hawaii invested the most, $199.69 per person in 2015.  The same year, Georgia was three steps up from the basement floor at $13.77.
Ozy also said that five Southern states are in the Top 10 of America’s “Waste Hotspots.”  I am ashamed to say that Georgia made that deplorable imported-waste list at No. 10.  And who exports the most?  That’s right: New Jersey and New York.
Georgia is beyond blessed with natural resources.  As I crisscross the state, I’m much like a kid in a candy store.  It’s hard to pick the piece of the Peach State that I like the best.  That’s why I am so passionate about protecting these irreplaceable gifts.
I repeat: “Go online and read Ozy’s ‘Love Thy Neighbor: The Bible Belt Is Becoming A Dumping Ground.’”  And for sure, do not miss the embedded video about Duke’s toxic coal-ash dumping in Banks County, north of Athens.
If that doesn’t wake you up, maybe an inevitable environmental nightmare will.
In the meantime, I’m with David Brasfield.