The way he walked the high school halls, I knew our barrel-chested principal didn’t lack self-confidence. He wasn’t a big man. But his voice was large, whether he was standing before us or booming over the intercom. His swagger said he meant business. I wasn’t surprised to learn C.E. Bacon had been a boxer in World War II.
When I stood by his deathbed, I squeezed his hand and thanked him for defending me in 1966. He hadn’t used his Navy-trained fists. Instead, he stuck out his thick neck to take my side in a dispute with two teachers.
The details aren’t important today, but I remember something else C.E. Bacon often repeated. In a gruff voice, he would say, “I may not agree with what you say, but I will defend to my death your right to say it.”
I liked knowing that someone—with his courage—would defend my right to be vocal. A couple of years later—at the University of Georgia—I was introduced to the writings of philosopher Voltaire, 1694-1778. Our principal was paraphrasing the Frenchman’s view: “… I detest what you write, but I would give my life to make it possible for you to continue to write.”
In the Henry W. Grady School of Journalism, I studied the First Amendment to the United States Constitution. For 48 years, freedom of speech has been a cornerstone of my newspaper career. And every time I am accosted for my opinions, I visualize C.E. Bacon standing on Jesup High School’s stage. After all this time, his statement still resonates. 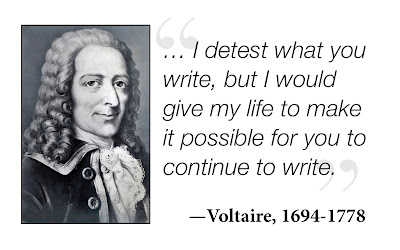 Opinions are exactly that: opinions. As Americans, we are entitled to have personal views. Agreeing to disagree can be done in civil tones, but that’s becoming a rarity. Our nation is so polarized that we have adopted an ugly them-or-us culture.
The tragedy is that, if you don’t agree with another person, you are apt to be tagged a thumb-sucking liberal, a communist, a socialist, a right-wing nut or even an imbecile. And, in return, those criticized are quick to harpoon their adversaries with equal disgust.
Did I miss something in my freedom-of-speech lessons? For the First Amendment to work, freedom has to flow from one extreme to the other and cover everything in between.
I am amused—but not offended—when people try to pin a polarized label on my lapel. I am determined to be a think-for-myself moderate. I strive to let common sense—not divisive labels—govern my thinking, including when I walk into the voting booth or when I choose my words. I am a veteran and the son of a veteran. Isn’t that why generations of American men and women have fought and died to protect those freedoms?
People ask, “What’s a good community newspaper?” I believe a good newspaper is a community talking to itself through the pages, especially the editorial pages. That includes institutional editorials, columnists (staff and guests), cartoons, letters to the editor, opinion polls and photographs with a poignant message. Healthy debate is healthy for the community and its newspaper.
Since Aug. 23, 1971, when Wayne County Press editor Elliott Brack injected ink into my veins, I’ve become accustomed to castigation for publishing unpopular-to-some opinions—mine and others. The hateful barbs can sting, but I always go back to memories of my high school principal.
The ballast that stabilizes my belief about opinions is C.E. Bacon’s version of Voltaire: “I may

not agree with you, but I will fight to my death for your right to say it.”