We must stand up for people and places

(Note: This is my Aug. 6 testimony in Atlanta at the Environmental Protection Agency’s public hearing on Georgia’s coal combustion residuals [CCR, or coal ash] permit program.)


Thank you for hosting this public hearing.
I am Dink NeSmith, a newspaper publisher in three states—Georgia, Florida and North Carolina.
My hometown is Jesup, in Southeast Georgia.
Behind household trash, coal ash is America’s second-most abundant waste material.
Georgia and the rest of the United States have a serious pollution problem with toxic coal ash. In January 2016, our Jesup newspaper discovered the community was on the verge of accepting as much as 10,000 tons—per day—of toxic coal ash. The privately-owned landfill sits atop the Floridan Aquifer, in an area of wetlands and streams that flow to the Atlantic Ocean 40 miles away.
Previously—with limited public awareness—800,000 tons of toxic Florida coal ash were imported and stored in the Broadhurst Environmental Landfill, owned by Republic Services Inc. The Phoenix-based conglomerate is the second-largest waste-management company in the nation.
In 2016, after a reporter dug through more than 1,000 pages of documents at Georgia’s Environmental Protection Division (EPD), we learned of a spill or leak of dangerous beryllium into groundwater.
There was no public notice until our newspaper, The Press-Sentinel, reported it.
One of the key issues we have with Georgia’s proposed coal-ash regulations is that public notice is not a top priority. People deserve to know. Jesup and Wayne County almost became one of the largest depositories of toxic coal ash in the nation. 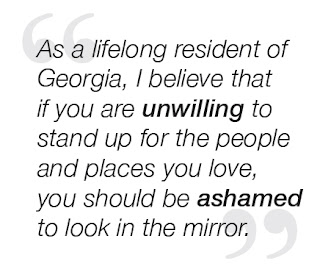 As you can imagine, there was a public outcry. To its credit, Republic listened.
But because Georgia has weak toxic coal-ash laws, our state has become a dumping ground for other states. As I stand here, a convoy of trucks is streaming down I-85 into Georgia from North Carolina to dump Duke Energy’s coal ash in Banks County in Northeast Georgia. And just south of Jesup, Puerto Rico’s coal ash is being dumped in Waste Management’s Chesser Island Landfill. The landfill is on the lip of the Okefenokee Swamp, one of America’s greatest natural wonders. It’s a treasured wildlife refuge, but where is the outcry … especially from the EPA?
Today, you will hear many arguments as to why EPA and Georgia’s EPD need to be more aggressive in protecting our people and our environment from toxic coal ash. As a lifelong resident of Georgia, I believe that if you are unwilling to stand up for the people and places you love, you should be ashamed to look into the mirror. And as a journalist for almost 50 years, I am a staunch advocate of the public’s right to know. Even the government’s name for coal ash is cloaked with an unfamiliar label, CCR. Too much of what’s going on in Georgia pertaining to toxic coal ash is out of public view.
FOR EXAMPLE:
*EPD is not required to conduct public hearings on coal-ash permits. Hearings are vital, especially in the towns where toxic coal ash will be stored permanently. There are public hearings for municipal solid waste, so why is coal ash shrouded in secrecy?
*EPD is proposing a five-year review of CCR—that’s coal ash—permits with no public involvement. I repeat: No public involvement!
*How about this scary thought? EPD’s permitting program allows coal-ash ponds to be capped in place with no liners on the bottom. Is that a public-be-damned way of forcing life-threatening risks on current and future generations?
For 43 months, I have done whatever I can to advocate for responsible toxic coal-ash solutions. As of this week, I’ve written 101 columns on the subject. Georgia has made some strides, but we are a long way from a comfort zone.
Again, I thank you for the opportunity to express my concerns. I leave you with the words of Gus Speth, an acclaimed scholar, lawyer and environmental expert:
“I used to think the top environmental problems were biodiversity loss, ecosystem collapse and climate change.
I thought that with 30 years of good science we could address those problems.
But I was wrong. The top environmental problems are selfishness, greed and apathy …
… and to deal with those we need a spiritual and cultural transformation … and we scientists don’t know how to do that.”
So, my prayer is that you, the Environmental Protection Agency, won’t allow greed and selfishness to overpower the common good of the people of Georgia and America.
Thank you.