“That’s one small step for a man … one giant leap for mankind.” When astronaut Neil Armstrong proclaimed those words on July 20, 1969, millions of eyes were glued to TVs, witnessing what had been prophesied on Sept. 12, 1962.
Speaking in Houston’s Rice Stadium, President John F. Kennedy challenged America to beat the Soviets in the race to our celestial neighbor, 238,900 miles away. NASA responded with Michael Collins, Buzz Aldrin and Armstrong, touching down—inside the Apollo Lunar Module Eagle capsule—on the moon’s dusty surface.  Armstrong’s subsequent footprints and the fluttering Red, White and Blue signaled victory and “one giant leap” into future technological advancement. 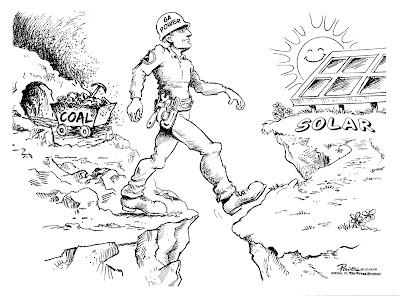 During that frenzied, ultra-expensive pursuit, Americans were not universally supportive of NASA or the we-must-be-first-to-the-moon mantra. But looking back 50 years, today’s pride has overshadowed those naysayers.  History has shown that the space program’s benefits have made this a better world.
While we were rejoicing over the 50th anniversary of Apollo 11, I could see a parallel coming from the Georgia Public Service Commission’s (PSC) July 16 decree.  The PSC voted unanimously to require our state’s largest electricity provider to supply more renewable energy—i.e., solar power.  Georgia Power had already announced it was eliminating all of its coal-fired plants.  Both announcements are “one giant leap” for Georgians and the environment.  We offer kudos to the PSC and Georgia Power.
What Georgia Republicans on the PSC did unanimously shouldn’t be overlooked, especially with Washington leadership vowing to save the coal industry.  President Trump appointed Andrew Wheeler, a former coal-industry lobbyist, to lead the Environmental Protection Agency (EPA).  If there was ever a proverbial fox in the environment’s henhouse, that’s what we have at EPA.
Still, our PSC made a bold move, attaching more of our energy’s future to the sun rather than the president’s pet project—coal.  Coal is cheap.  It’s a job-creator, but the downside of its burning includes dangerous air emissions and mountains of toxic coal ash.  Georgia and the world are plagued with what to do with billons of tons of poisonous coal ash.
Georgia Power, we thank you for giving up burning coal. Now the challenge is what to do with all the toxic coal ash.  I contend it should be moved away from waterways, wetlands and aquifers into lined landfills on Georgia Power property.  I am opposed to sacrificing the safety of one community’s health to solve another community’s problem.  Ethically, that’s irresponsible and abhorrent.  Landfill liners aren’t the eternal solution, but the precaution is better than nothing. 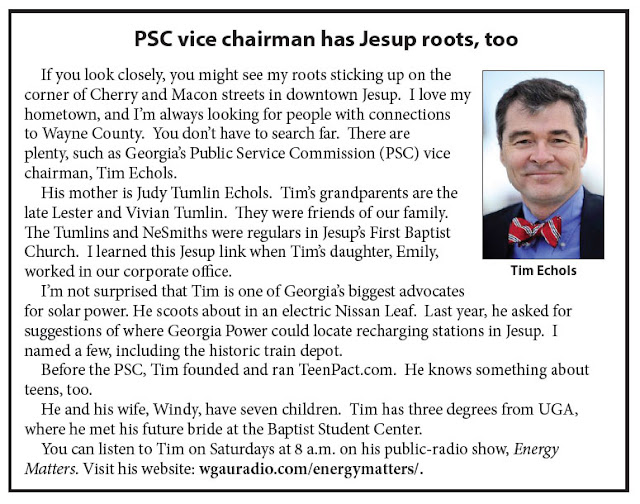 In the meantime, let’s applaud the positive steps to make Georgia more reliant on cleaner energy sources.  In the PSC’s announcement, Chairman Bubba McDonald said, “I determined Georgia has the ability to add significantly more renewable energy and solar energy using a market-based approach without any upward pressure on the ratepayers and no state subsidies.”
Georgia Power’s senior vice president Allen Reaves made this statement: “We are positioning Georgia as a leader in the Southeast in battery energy storage, which is critical to growing and maximizing the value of renewable energy for customers as we increase our renewable generation by 72 percent by 2024.”
Fifty-seven years ago, not everyone embraced JFK’s challenge.  America’s ingenuity put Armstrong, Collins and Aldrin where no other man had ever been.  The same genius and determination can solve the toxic coal-ash dilemma.
But right now, let’s celebrate the PSC and Georgia Power’s news. We are taking “one giant leap” toward where Georgia needs to be in producing energy and protecting the environment.