Our veins pump ink for you

The rule was the same for Alan, Emily and Eric. When their noses inched above the mailroom’s table—so they could see what they were doing—they went to work. That meant by age 8, they got ink into their veins through their fingertips by inserting sections of The Press-Sentinel.
When Eric heard me tell that story, he countered, “Remember? I couldn’t wait until I was 8. When I was 7, you got a Coca-Cola crate for me to stand on.” He’s right. And 33 years later for him and 38 years later for Alan, they’re still doing what the three of us love—publishing newspapers. Emily could be with us, too, but she was called to be a schoolteacher and mother of four boys, ages 5-15.
My first touch of ink came as a 10-year-old in 1958. When Orange Street Elementary School’s 3-o’clock bell rang, I’d jump on my bike and race toward South East Broad Street. After bumping across the railroad tracks, I wheeled left to The Jesup Sentinel’s back door.
When Bryan Kirby sold me a stack of the weekly edition, I pumped my Schwinn to the Sea Island Shirt Factory on Cherry Street. As the ladies left work, I turned my nickels into dimes before the ink dried on that edition of my hometown’s news. In 1971—after UGA and a brief stint in the Army—I started my adult career at the Wayne County Press.
Forty-eight years later, the ink still flows through my veins.
Times have changed, but not my passion for a community newspaper’s role.
I smile when Alan steps on his soapbox: “We’re not the ‘media.’ We’re your hometown newspaper. We live here. We work here. We vote here. We pay taxes here. We go to church here. We volunteer here. We are devoted to this community. The state and national ‘media’ doesn’t do the things we do. And our door is always open. Try sitting down and talking with those ‘media’ people. We are your hometown newspaper. We are your best source of reliable information. We are your cheerleader, and we’re your watchdog. In most towns, we’re probably the oldest, continually operated business.” 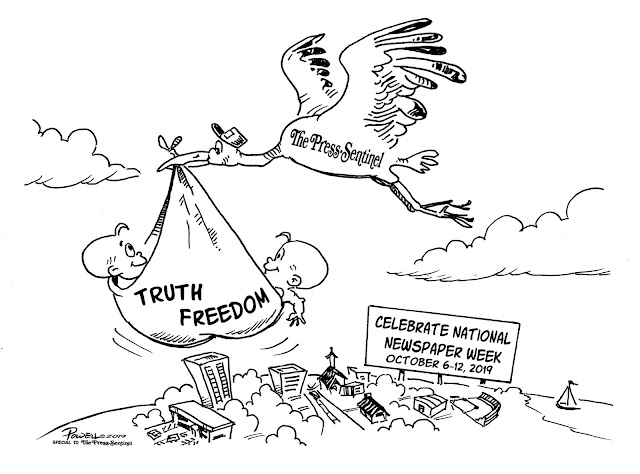 Alan is right. We don’t just show up to cover sensational stories. We’re here 365 days a year. We care about your children and the sweet potato that you plucked from your garden, the one that resembles comedian Bob Hope and his ski-jump nose. We care about the city-hall and courthouse sausage works. Why are your taxes going up? And if your government is operating behind closed doors, we want to beam sunshine into those dark corners.
Research documents prove that local governments pay higher bond rates when there is no local newspaper holding leadership accountable. Devoted men and women do the heavy lifting of making local governments function properly. Your newspaper’s job is holding up a mirror to reflect the good and bad of what’s happening.
There’s a lot of yip-yap about “fake news” in the “media.” Alan is right. We aren’t “the media.” We are your hometown newspaper. Just as you do, we despise fake news. If we get our facts wrong, we are eager to make corrections. We encourage you to hold officials and us to a high standard of credibility. News is separate from editorial-page opinions. We aren’t bashful about “pumping iron” with our ink, speaking up on issues. We covet your opinions, too. Write us a letter.
We treasure your support and trust.
And our business is for you to know.