Fighting for ‘peace in the valley’

Because the bones of my skinny behind were crunching on the heart-pine pews of Pilgrims Home Primitive Baptist Church, I couldn’t really appreciate the lyrics of “Peace in the Valley.”  What my 8-year-old mind wanted was to escape that Baker County sweatbox, before I was parched like the peanuts stacked on a pole in my grandmother’s field.  It was hot, almost as hot as the fire and brimstone being hurled by Brother Cattret from the pulpit.
My DNA is country-fried.  I love living on a farm.  But praise the Lord for modernization.  Air conditioning is a blessing.  However—when the first cool snap arrives—I like to raise a window and let in some of God’s air conditioning.  Such a simple thing is easy to take for granted.
But on Oct. 7, I met a throng of folks who aren’t taking fresh air for granted.  Sardined into the county’s meeting hall, the Oglethorpe County residents—despite air conditioning—had steam billowing from their ears. Raised windows aren’t an option for them. These folks can’t walk outside without gagging. Their “peace in the valley” has been robbed.
Foul-smelling industrial sludge and who-knows-what-else had been dumped near their homes.  Nausea and headaches were common complaints.  Their quality of life had been destroyed by out-of-county companies wanting to get rid of noxious materials, which those businesses wanted away from their noses, their groundwater and their streams.
Why would this even be allowed?
Follow the money, and you’ll see the reason and the complexity of the issue.  Loosely written Georgia soil-amendment laws have large-enough loopholes for 18-wheelers to drive through.  And they do, pulling tankers filled with nasty stuff.  Farmers are told the vile material will improve their soil, plus—sometimes—there’s a check attached to each load. 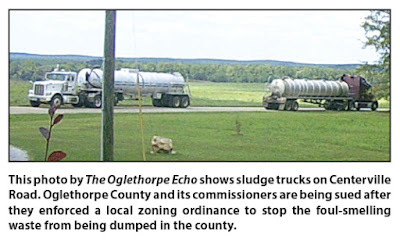 The typical farmer needs help.  I get that.  I am married to a farmer’s daughter.  But as they say: “There’s no right way to do a wrong thing.”   There’s nothing right about solving one problem by creating another.  We aren’t talking about chicken litter.
Stephens County went through an awful spate of stench and sued the culprit.  The case was settled.  The dumping stopped.  Wilkes County has been dumped on, too.  Elbert County citizens have been holding their noses while battling to stop the stinky invasion of “food production waste.”
But it doesn’t stop there. When the Georgia Environmental Protection Division (EPD) made a surprise visit to an Elbert farm, it discovered “sludge in the earthen pit was adulterated.”  Some of that “adulteration” was plastic tampon applicators, condoms, plastic bottle caps, candy wrappers and other assorted items.  I’m for farmers, but how can you be for this?  The Georgia Department of Agriculture is reviewing and tweaking its rules to hopefully close the loopholes.
The Oglethorpe commissioners are mostly farmers, but they didn’t hesitate to fight back when a trio of waste-hauling companies sued the county and them individually.  The five officials stood by their decision to enforce a zoning ordinance which prohibits this type of dumping.  Their hot-under-the-collar constituents got some relief, watching the board vote, 5-0, to defend their quality of life.
Georgia is a Right to Farm state.  Agriculture is our biggest industry, and I’m proud of that.  And if you choose to move adjacent to or near an existing hog, cattle or poultry operation, you shouldn’t be surprised about the smells.  But if you live in the country and one day a big-rig tanker shows up next door to unload putrid, potentially polluting and mystery gunk—in the name of fertilizer—you should have a right to protest.
Who knows what the court will decide?
But on Oct. 7, I witnessed the consensus of the court of public opinion.  If you want “peace in the valley,” you must be willing to fight to protect that peace and quality of life.